You are here: Home / Archives for Time Travel 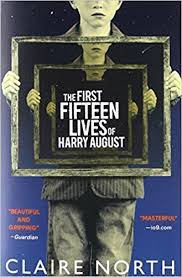 The First Fifteen Lives of Harry August follows our main character Harry August who lives his life, over and over and over. But it’s the same life, and he always returns to exactly where he began: as his mother gave birth to him in the ladies restroom. Once he reaches the age of 6 or 7, all of his memories return, complete with all of the knowledge he’s amassed in his previous lives. Think of the movie “Groundhog Day” except for an entire lifetime. It’s also worth mentioning is that Harry is extraordinarily gifted in that he was a mnemonic, meaning he remembers every single detail from each of his lives.

What’s interesting though, is that he doesn’t live the exact same life and he can choose to do whatever he wants during his lifetime, whether it be teaching at a university, becoming a scientist, a lawyer, a doctor, or a physicist, living in Russia — whatever he wants to do. So in this way, he does have free will to live whatever kind of life he wants, to go in whatever direction he wants. For example, throughout his lives, Harry has lived in an amazing variety of places such as England, Russia, China, and the United States. He can also choose to fall in love with the same person as a previous life or move on to someone new.

Finally, during one of his lives, he learns that there are others like himself who call themselves the Kalachakra which I believe was Buddhist terminology for the wheel of time. The word Ouroboran was also used to describe those who live, die, and are reborn to relive their lives again. This comes from the word “Ouroboros” which is the serpent eating its tail, which represents the never-ending cycle of death and rebirth.

So the Kalchakra have formed a club called the Chronus Club with branches all over the world, and they try to help each other out, especially during the challenging childhood years. Imagine being 800 years old and having to live as a child under the thumb of your parents until you come of age. That’s where the other Kalachakras step in and help, as they often extricate the Kalachakra children from ridiculously repetitive or overly difficult childhoods.

But they do have their rules: they are not allowed to do anything that will drastically change the future. For instance, they cannot kill Hitler or try to prevent JFK’s murder, or introduce future science, or anything for that matter that could cause a ripple effect throughout the course of history.

Of course, there are always those bad apples who abuse their power. But members who knowingly break these rules are severely dealt with in one of two ways: an electrical clearing of the mind which means that none of their past memories will return in their next life, or a pre-birth termination, in which they will not be born, thus terminating the cycle for good.

What I found fascinating is that the club members pass messages to each other through time. How this works is that a child will give a message to another member when he or she is old, so when that person is born again, they can, in turn, pass the message on to other members who are nearing the end of their life. So in this way, the past connects to the future, and the future connects to the past from one lifetime to another.

But one day, it all changes. At the end of Harry’s 11th life, a little girl appears at his bedside and warns Harry that in the future, a global catastrophe occurs and that he and the other members have to do something to try to stop it. But as Harry and the others investigate, they figure out that one of their own is to blame — one of the Kalachakra is breaking the rules, and now it’s up to Harry figure out who is doing it, when they’re doing it, how they’re doing and to somehow stop the catastrophe from happening.

I loved the immense scope and scale of this story and felt that this was an exceptionally well fleshed out version of time travel. Through Harry’s various lives, we get a peek into history, especially the highs and lows of the 20th century. Additionally, the story was a chance to explore Harry’s individuality as well as his connection with others, all the while dealing with major themes of good vs. evil, birth, death, science, religion, love, hate and so much more. How many times have most of us thought about how different our life would have been had we chosen a different path? This book explores just that question. It’s a book about what we could accomplish if we had an eternity. Absolutely fascinating. But then again, I love time-travel books, and this was for sure one of the better ones.

Now I will admit that initially, it was rough going with this book. I actually considered DNFing it about 60% in. The story is told from multiple timelines which took a bit of getting used to. But more than that, this is a dense book, and it takes quite a bit of time for the story to develop. But once it did, boy oh boy, what a ride it was! I’m thrilled I stuck it out because it was so worth it in the end. The story really picked up speed and ended up being exciting and gripping, engaging me all the way to the surprising and stunning (yet entirely satisfying) ending.

All an all, The First Fifteen Lives of Harry August is a profound and gripping story with a compelling and relatable protagonist, an exciting, well-developed plot line and a fun supporting cast of unique and interesting secondary characters. As people drift in and out of the story, I was struck by how full and complete all of the characters are and how much they added to the storyline. This was an emotionally intense, and deeply engaging novel that had me on the edge of my seat until the explosive ending. I felt that The First Fifteen Lives of Harry August was not only cleverly written but also eloquently narrated and I’m so glad I read it.

Purchase The First Fifteen Lives of Harry August at Amazon