You are here: Home / Archives for Young Adult

Seventeen-year-old Chloe had a plan: work hard, get good grades, and attend a top-tier college. But after she collapses during cross-country practice and is told she needs a new heart, all her careful preparations are laid to waste. Six months after her transplant, everything is different. Stuck in summer school with the underachievers, the “new Chloe” takes heedless risks, like skipping her anti-rejection meds while running wild with the class party girl and nearly crashing a motorcycle she’s not even licensed to ride. Even more unsettling: her recurring nightmares of dying and the strange, vivid memories she doesn’t recognize as her own.

The only place Chloe feels at home is in the ocean, where she’s learning to surf the Pacific’s wild waves and slowly falling for her instructor, Kai. But as her strange symptoms continue, she becomes more and more convinced that something is wrong with her new heart—or even worse, her mind. As Chloe searches for answers, what she learns will lead her to question everything she thought she knew about life, death, love and the true nature of reality.

This follows our main character Chloe whose life is derailed after she collapses while running. She learns that she has a serious heart condition and is a very sick young lady.  Her doctor tells her that her only chance of survival is to obtain a heart transplant sooner rather than later.  Luckily for her, a heart becomes available, and the operation is a success.

So after that, C begins to have disturbing nightmares about dying in a motorcycle crash and dreams about a woman she’d never met, all of which start seeping into her everyday life. She’s also begun recognizing people she’d never seen before, experiencing unfamiliar feelings, and is developing a desire for doing things that have never even crossed her mind in the past, such as surfing and getting tattoos.  She ends up exploring her “rebellious” side, something quite out of character for the “old” Chloe.

To satisfy her urge for surfing, she even begins taking lessons from a super attractive surfer dude named Kai, and he ends up playing quite an essential role in her life.

The book got especially interesting once she starts researching cellular memory, in which an organ donation recipient can experience thoughts, feelings, and even memories of the original organ owner.  I was mesmerized when the story took off in this direction, and Chloe begins asking some big questions, providing a lot for the reader to think about as well.  It was fun journeying and guessing along with Chloe as she moved closer and closer to a place of understanding.

So what we have here, then, is kind of a speculative mystery as Chloe searching for answers about what is happening to her — about the strange visions and memories that seem to be taking over her life. She even tracks down her heart donor’s family to prove to herself she’s not going crazy.

This is such a sensitive subject, and Takaoka delves into with a lot of thought and consideration to all parties who might be involved. This is one of those books that was about a serious issue and one that you probably don’t think about unless it touches your life; about how in order for one person to live, someone else had to die. I’d never considered many of the issues that this book brought up, and I am definitely glad that I read it.

And the unusual paranormal/quantum physics direction that the book went in as well as the compelling mystery added to the richness of the reading experience. There’s also a HUGE twist near the end which I did not see coming, but which made me love this story all the more. I was surprised in the best of ways, and the new knowledge even brought a tear to my eye.

In truth, Everything I Thought I Knew is a super-rich story: it deals with very loaded issues like grief, regret, loss, survival, and trauma, but also with the opportunity to start anew, with the vital importance of second chances, and the difficult journey of personal growth. It’s Chloe’s steely determination to figure out what was happening to her that makes Everything I Thought I Knew compelling, fierce, and ultimately human.

A huge thank you to Shannon Takaoka and Netgalley for providing me with a review copy of this novel.

Purchase Everything I Thought I Knew from Amazon 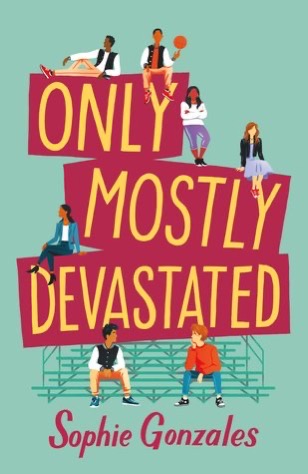 Only Mostly Devastated is a super-fun boy-meets-boy spin on Grease, which follows our two main characters, Ollie and Will. The story takes place in North Carolina, and the two boys have had an amazing perfect summer romance by the lake, which comes to an end when Ollie’s family is supposedly heading back to California. But Ollie is confused and a bit heartbroken when Will subsequently ghosts him, not returning any of his texts or emails.

Then Ollie’s family has a last-minute change of plans and ends up staying in North Carolina to help with his dying aunt, meaning he has to attend a new school. So imagine Ollie’s surprise when he discovers that Will goes to the exact same school as him. But their reunion is by no means sunshine and roses. Ollie is immediately heartbroken when he sees Will at a high school party, and Will snubs him, acting as if nothing has ever gone on between them.

As we learn, Will is a star basketball player at school and still deeply in the closet. He’s also quite freaked out by Ollie’s presence as his school, but yet, he can’t deny his feelings for Ollie. So now Will has to decide whether he should follow his heart and in the process risk his popularity and friendships with the other basketball players, or stay the course and stay in the closet.

Both boys attempt to move on from each other, but as they learn, moving on is a lot more complicated than they’d thought.

I thought this was an adorable young adult rom-com with a lot of heart. I appreciated that the author wrote sensitively about a person’s decision to stay in the closet and their right not to be outed by others. On the surface, this may seem like a fluffy romance, but actually, there’s real depth to this story, which delves into themes of death, grief, coming out, identity, sexuality, family, heartbreak, and first love. What I liked was how the author balanced the heavier themes with light, sweet humor resulting in an all-around balanced narrative.

I love Sophie Gonzales’s writing: clear and evocative, with just the right amount of description. I also felt that her characters were a joy to read, especially Ollie, who was super sweet, likable, caring, a bit bumbling, and perhaps a tad melodramatic, which rendered him all the more endearing. The author does a great job getting into the heads and hearts of her main characters, and her secondary characters are also vivid, well-drawn, and add to the impact of this book. They all felt genuine to me.

I also enjoyed the amount of personal growth that the characters, including several of the secondary characters, experienced throughout the story. So in this way, I thought the character development was stellar.

As for the romance, Ollie and Will together are great. They have this fabulous chemistry, in spite of Will’s hot and cold moods and Ollie’s attempts to distance himself from Will. What I liked was how the author gave our two characters space and time to find their place in the world and to find each other, and in this way, people struggling with their own sexuality might find this to be a thought-provoking read.

Readers who like a little messy YA romance will definitely get that in abundance here – Ollie and Will’s interactions are humorous, awkward, a bit frustrating, and sometimes exactly as confrontational as they need to be. Only Mostly Devastated is the type of story that you’ll want to fall head over heels in love with again and again, and it was a solid 5-star read for me. Loved it!

A huge thank you to NetGalley and to St. Martin’s Press for providing me with an ARC of this story.

Purchase Only Mostly Devastated from Amazon