You are here: Home / Archives for Patrick Ness 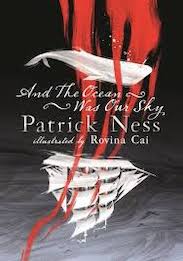 I love Patrick Ness, and when I heard that he wrote a re-imagining of Moby Dick but told from the point of view of the whales, I simply had to pick it up, even though I hate to admit that I’m not much of a fan of Moby Dick. Though to be fair, I was in high school the last time I attempted it.

And the Ocean Was Our Sky is a beautifully illustrated graphic novel that follows our main character – a female whale named Bathsheba, her fierce hunting whale pod and their ongoing war with humans. What made this story especially interesting is that the book is told entirely from the whale Bathsheba’s point of view.

Patrick Ness shows the brutal and vicious cycle both whales and humans are caught up in an endless cycle of revenge. In this way, the story is grim and dark in places but definitely not without hope.

I thought the dynamic between the whales and humans was utterly fascinating, and this relationship was laden with deep symbolism and metaphor. I found myself setting down the book several times, to contemplate the deeper meaning of what I was reading. I appreciated the paradox of how both sides hunted the other in order to prevent from being hunted by the other.

I’ve seen this book this referred to as an upside-down retelling of Moby Dick and it description nailed it in my opinion — especially since the whales referred to the bottom of the ocean as their sky (hence the title) and the human sky as The Abyss.

What I especially loved about this book were the illustrations. They were beautiful and haunting, and added to the richness and depth of the story. I’d go so far as to say they’re integral to the story, so you definitely do not want to bypass them when working your way through the novel.

Now I will say that this is not a novel for children even though it is published in the Young Adult category. This is a novel with mature, complicated and intricate themes which may be better understood by adults and older teens. Additionally, the illustrations tended to be quite dark as the novel progressed…and by dark I mean blood and depictions of violence; so in this way, it was a raw and graphic story. What I found especially compelling was how the illustrations started out in complete black and white with increasing amounts of red as the tale became bleaker.

There were so many interesting themes to this story such as clinging to the past, obsession, war, the passing down of prejudices, the pursuit of violence, hatred of others different from ourselves and how often, we end up becoming the monster we think we’re fighting. There was also the idea of how getting to know our enemy is the key to stop fearing and hating them, which was well illustrated in the ending. The ending, by the way, was amazing and I love it.

All in all, And The Ocean Was Our Sky is a wonderful, multi-layered thought-provoking fable with gorgeous illustrations and beautiful writing that is well worth the read. The emotional, physical, and ethical challenges of the characters pulled me right from the very beginning and didn’t let me go until the end. It was an immersive, compelling, and complex read that I ended up loving. I ended up giving this phenomenal book five stars.

Purchase And The Ocean Was Our Sky at Amazon

Purchase And The Ocean Was Our Sky at The Book Depository