You are here: Home / Archives for Irish LGBT fiction 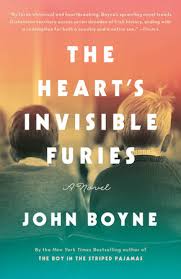 This is the story of Cyril, who is born in Dublin, Ireland in 1945 to an unwed, 16-year-old mother named Catherine Goggin. Catherine was forcibly banished from her small hometown by the local priest because of her pregnancy, and the priest literally dragged her out of the church and into the street, kicking her along with way. Quite a horrifying scene, truth be told. Here, we see firsthand the incredible and harrowing power over people’s lives that the Catholic Church once wielded and how it controlled and manipulated people through fear and intimidation.

So baby Cyril is adopted by a strange and somewhat unconventional couple, Harold and Maude Avery, who, though well-meaning, have very little feelings for this little boy. They even insist that he call them Harold and Maude instead of Mother and Father because after all, he is not a real “Avery.”

As a child, he realizes he is gay, which is not an easy thing to be in ultra-conservative Catholic Ireland. He is also in love with his best friend, Julian. The storyline of him and Julian was at times humorous but also heart-wrenching, as Cyril tried to push his feelings aside. Cyril’s life as a closeted young gay kid is not an easy one.

So this book then spans all the decades of Cyril’s life through seven-year increments covering his loves, losses, tragedies, longings, regrets, his mistakes, and all the lessons he learns along the way.

This book was quite heartbreaking at times in its depiction of what life was like in Ireland, until very recently, for women and gay men. It’s also very much about the culture of Ireland and all of the changes the country the went through from 1945 to 2015, the year the story ends. So in this way, I ended up learning a lot about Ireland.

Now I don’t want to give the impression that the book was overall grim because that’s not the case. Though the story does start out with hypocrisy, hatefulness, and mean-spiritedness that was difficult to read about, it ends with the triumph of sanity. There are also plenty of savagely funny scenes with hysterically humorous, clever and witty dialog.

I loved the snappy banter between the characters and the eccentric personalities of many of them. That being said, the secondary characters were a delight, and each was well-fleshed out. They felt like real people that each of us might know.

This book grabbed from the first page, and it was nearly unputdownable. The first line, in fact, was hooked me right in:

“Long before we discovered that he had fathered two children by two different women, one in Drimoleague and one in Clonakilty, Father James Monroe stood on the altar of the Church of Our Lady, Star of the Sea, in the parish of Goleen, West Cork, and denounced my mother as a whore.”

I found The Heart’s Invisible Furies exceptionally moving and entertaining, and it took my breath away at times, with its compelling narrative and beautiful, expressive lush prose. This is not just a coming of age story, but also a man’s emotional search for a sense of identity and country. It’s about love, loss, longing — about struggling with who one is.

Cyril’s character though likable is deeply flawed and though good-intentioned, he does do some horrible things and inadvertently ends up hurting people, as we all do at one time or another in our lives.

All in all, a beautiful, heart-warming and poignant book that I’m so glad I read. The Heart’s Invisible Furies was my first John Boyne book, and I look forward to reading more by this author.

Purchase the Heart’s Invisible Furies at The Book Depository