You are here: Home / Archives for bookstore stories 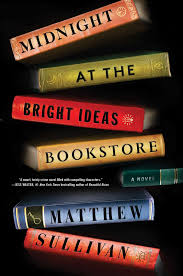 I love me a book about bookstores and other bookish things, so I was happy when this little gem crossed my path. Judging by the bright, happy-looking cover, I guessed that this might be a cozy mystery with lovable characters and a gentle plot line. Well, there was nothing cozy about this book. It just goes to show you one indeed cannot judge a book by its cover.

DEATH AT THE BOOKSTORE

So this follows Lydia Smith who lives a quiet life with her handsome boyfriend with whom she’s been living for the past five years and is an employee at — you guessed it — The Bright Ideas Bookstore. There’s a group of eccentric, unemployed and lonely regulars who frequent the bookstore to read, nap, play chess and lose themselves amongst the shelves and whom the bookstore’s employees lovingly refer to as The BookFrogs. A couple of these Bookfrogs play a pivotal part in this story.

One night while Lydia is working her shift, Joey Molina, the youngest and more sensitive of the BookFrogs, hangs himself in the bookstore’s upper room. Lydia is the one who finds him and is devastated by Joey’s death, as Joey was one of Lydia’s favorite of the Bookfrogs.

THE END OF CALM

But Lydia’s quiet life becomes unglued when she discovers a picture in Joey’s pocket — a picture of her and her best friend Raj at her 10th birthday party — a picture nobody should have or even know about. Because you see, Lydia is on the run and has been ever since she was a child, now living her life using a fake name after having severed all her past connections. Throughout the majority of her childhood, she lived in isolation in the mountains with her father after a horrible event drove them to leave town. Now twenty years later, she has started a new life with a clean slate and has done her best to forget about the past. But the existence of this picture taunts her and is a harsh reminder that we cannot always escape our past.

Her life unravels even further when a reporter takes her picture at the suicide scene and, to Lydia’s utter horror, it ends up in the newspaper where anyone could see it. Anyone.

As it turns out Lydia was Joey’s favorite bookseller, and as such, he bequeathed his meager worldly possessions to her, mostly books that she herself had sold him.

But Joey had defaced every book in a strange, disconcerting way, cutting words and parts of words out of the page. Lydia eventually discovers that the books which Joey defaced was actually a puzzle and contained hidden coded messages meant especially for Lydia. As Lydia slowly deciphers Joey’s strange messages, the story begins to transform into somewhat of a darker and much more unsettling tale of a heinous unsolved murder as Lydia connects and links the contents of Joeys messages to her own troubled past.

As Lydia untangles the mystery of the defaced books and of Joey’s suicide, in so doing she unearths long-buried memories from her own violent childhood, namely those of The Hammerman, a murderer who came into Lydia’s life long ago and she now finds herself reliving an experience that still chills her to the bone.

Her nerves are further frayed by several other events: First, there’s the reappearance Raj, her childhood friend who she hasn’t seen in twenty years; then a postcard from the police detective from the unsolved murder case; and finally there are the numerous telephone calls from her estranged father.

Now she can’t help but wonder whether Joey’s cryptic messages might help her to solve a crime that nobody else ever could and she takes it upon herself to find answers to the questions that have haunted her ever since she was little.

I ended up loving this imaginative literary mystery story because what bibliophile doesn’t love a book about books? In fact, most of the characters in the story were readers, so books were mentioned quite often in the story.

But this was actually quite a complex, incredibly well thought out and somewhat disturbing mystery — a tale of murder, suicide and coming to terms with one’s past. I loved how this suspenseful story unraveled ever so slowly, feeding us bits of information only a little at a time which kept me glued to the book as the puzzle pieces slowly came together.

So as such, this clever book had layers upon layers weaving in and out of both past and present events and really, kept guessing and engaged until the very end. And the characters were not only totally human and relatable, but they were quite multi-faceted with distinctive and well fleshed out personalities.

This was one of those novels where various seeming minor events and plot threads are tied back into the main storyline in extremely intriguing ways. And the ending was immensely satisfying.

All in all, I loved this book and gave it 5 stars.

You can check out Midnight at the Bright Ideas Bookstore here at Amazon or at The Book Depository.