You are here: Home / Fantasy/Urban Fantasy / Review of Winter Masquerade by Kevin Klehr 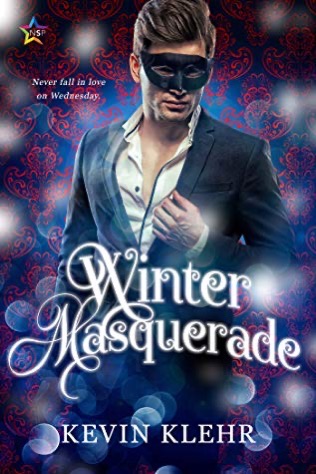 Winter Masquerade is an absurdist fiction story that follows a young man named Ferris who awakens on the Sea Queen, a ship that is sailing on a sea of chocolate and which contains passengers with names like Miss Calculation, Miss Communication, Miss Assumption and Miss Represent. He had no idea where he is or how he ended up in this bizarre, surrealistic world; all he wants to do is get home to his boyfriend, Harris. On the ship, he befriends an eclectic group of individuals who agree to help him find his way back. There is supposedly one person on the ship who can help him called The Alchemist, but unfortunately, he’s just been kidnapped, creating another mystery to solve.

A further mystery is the fact that Ferris seems to keep temporarily slipping into a darker, grittier, more menacing alternate dimension in which one of the ordinarily friendly musicians is trying to kill him, the ship he is on is nothing more than a rusted hunk of scrap metal, and the ocean is chock-full of garbage. What’s strange is that this only seems to happen when he thinks about a certain someone back in his “real” world.

This story really had an Alfred Jarry/Alice in Wonderland vibe to it, which was a lot of fun. Though at first glance Winter Masquerade seemed like an absurdist, possibly silly story, there were actually many layers to it, especially once we figured out the true reason that Ferris found himself on the Sea Queen, which was slowly revealed to Ferris throughout the course of the book.

I found it fascinating how Ferris’s new experiences paralleled what was going on in his real world and how the book ended up being a story about survival and finding your own inner strength — about taking back your power. It also served to remind us how easily someone can take that power away from us and, in the process, asks a lot of complex questions.

The characters in the story were charming and yes, silly, and each of them served a purpose in Ferris’s narrative as each helped Ferris to understand the life lesson his time on the Sea Queen is proving him. I especially liked Cole’s character and enjoyed how Ferris slowly unraveled the mystery, thanks to Cole’s influence. There’s also an interesting backstory surrounding Cole and Ferris’s relationship, which added an extra compelling layer to the story. All the quirky and outlandish events in the narrative were kept steady and were grounded by the realism and truth behind it all.

This was a wild ride of a story with stellar world-building, a fun cast of zany characters, and an important message underneath it all. I loved seeing Ferris come into his own and become the person he was meant to be. I thought this was utterly enchanting and a treat for anyone who enjoys an off the wall tale with many layers — an intense roller coaster ride through a world of chocolate and danger. This story is so inventive and so much fun that it repeatedly brought a smile to my face as I worked my way through it. I loved this little gem!

But at the end of the day, one cannot forget one of the most important lessons of the book: “Never fall in love on Wednesday. Nothing good can ever come from anything happening on a Wednesday.”