You are here: Home / Fantasy/Urban Fantasy / Review of Where There’s a Kilt, There’s a Way by Ella Stainton 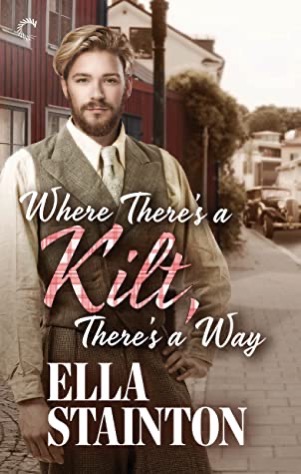 Two years ago, Dr. Ainsley Graham proved the existence of ghosts, and fell in love—hard to top that. But a trip to Sweden to research at a prestigious University for the summer is nothing to sneeze at, especially since his partner, psychologist Joachim Cockburn, will be teaching alongside him. A change of scenery might be just the thing.

Their idyllic trip to Sweden is interrupted by a ghost with a proclivity for rude hand gestures and graphic curse words—and a ghastly history begging to be investigated. Life among the living is complicated, too, by a gruff professor who can’t take his eyes off Ainsley, and an enticing new job offer for Joachim.

What starts as an adventurous trip abroad turns into mayhem, murder, and…a magical moose? And everyone—well, perhaps not the moose—is a suspect in the death of the ghostly young man who brings them together to expose secrets, loves lost, and a crime that will shock them all

This is the second book in the “Kilty Pleasures” series, and it was fun to spend time with Dr. Graham and Dr. Cockburn (Ainsley and Joachim) once again. In this story, Ainsley heads off on a field expedition to Sweden to research folklore about a ghostly moose (I know, right?). The kicker is that the Swedish professor who Ainsley will be accompanying may be a murderer — or at least, the ghost who’s haunting Joachim claims that he is. Worried that his lover’s life is in jeopardy, Joachim rushes off to Sweden to his aid. The two men then take it upon themselves to solve the ghost’s murder and bring the culprit to justice.

As was the case with the first book, there was plenty of fun and witty banter between our two main characters, lovable and quirky secondary characters, lots of zany situations, as well as misunderstandings and jealousy along the way. There were even gnomes!

I loved the chemistry between Ainsley and Joachim and enjoyed how the story was told from both of their points of view. allowing us a glimpse into each other’s thoughts. The story wasn’t only entertaining with its captivating setting, but the author also gives us a compelling ghostly mystery to solve. This is one of those warm, fuzzy stories where everyone gets what they deserve in the end, in the very best possible ways. But it’s the romance between Ainsley and Joachim that still steals the show. Their bond is a powerful one, and I adored their interactions.

The author has created a delightful world here, and I look forward to reading more books in this series with these endearing characters. There’s something about the comfortable familiarity, as well as the charm and lightheartedness with which the author approaches the world-building and the characters, that’s just fun.

Purchase Where There’s a Kilt, There’s a Way from Amazon