You are here: Home / Historical Fiction / Review of Where the Crawdads Sing by Delia Owens

Where the Crawdads Sing 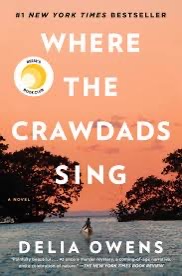 is a fascinating book that takes place during the 1950s and ’60s and follows a misunderstood girl named Kya Clark, who is also known as the Marsh Girl or Marsh Trash by the local people in Barclay Cove. Kaya is abandoned, first by her mother, then all of her siblings, and finally, by her drunken and abusive father, leaving her to fend for herself all alone on the marsh, without assistance from anyone. I think she was ten years old or so when the last of her family abandoned her.

The story is told in two alternate timelines: the first, focusing on Kya’s life in the marsh and her eventual romantic involvement with two young men from town. The other timeline occurs in 1969, during which a young man named Chase Andrews is found dead. At first, police think I was an accident, but upon further investigation, begin to suspect that the young man was, in fact, murdered. The townies immediately suspect the strange and aloof Marsh girl, especially given that she has been seen several times over the years in Chase’s company.

This is another one of those books that is super-haunting and atmospheric, and the rich, vivid descriptions of the soggy swamp, the birds, insects, water, sand, mud, plants, fish and other animals transported me right back to the 1950s and makes you feel as though you’re in the marsh right along with Kya.

While this is a lovely homage to nature, it’s also a moving and heartbreaking coming-of-age story about a resilient young woman who had to overcome abandonment, prejudice, scorn, and immense loneliness and how a person can rise above their circumstance when people believe in you.

Where the Crawdads Sing a character-driven story with an admirable and tenacious heroine that is part mystery, part love story, part suspense, and part adventure. This was an engrossing and surprising story that I absolutely loved and one that I will no doubt contemplate for a long time to come.

Purchase Where the Crawdads Sing on Amazon

Purchase Where the Crawdads Sing on The Book Depository