You are here: Home / YA Fantasy/Urban Fantasy / Review of Where I End & You Begin by Preston Norton 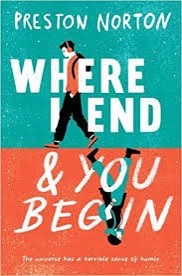 So first off, I’ll mention that I love the body swapping trope and some of my favorite films include Freaky Friday, Big, 18 Again, Vice Versa, 17 Again and the like. Now I’ve read a few body swapping books, and my experience has been that this trope doesn’t translate all that well to the written form. Body swapping novels often end up being frustrating and confusing, so though I was intrigued by the synopsis of this book, I was also a bit hesitant. But I needn’t have been because the author managed to pull it off here.

This story follows a somewhat shy, young man named Ezra Slevin who is obsessed with a girl named Imogen and is working up his courage to ask her to the prom. The only problem is Imogen’s overly protective best friend Wynona, a loud and annoying girl who has made Ezra’s life miserable for as long as he can remember and seems to derive enjoyment from tormenting Ezra whenever possible.

But on the night of the total solar eclipse, something weird happens to Ezra and Wynona — they wake up in each other’s bodies. But what’s especially strange is that they begin randomly swapping back and forth every day. To make things even more interesting, Ezra learns that Wynona has a crush on his best friend, Holden.

So the two enemies are forced to come together to form an alliance as they need to pretend to be the person whose body they’re inhabiting. They also agree to help each other with their crush — Ezra will help Wynona with Holden and Wynona will help Ezra with Imogen, with the body swapping adding in all sorts of additional hilarious complications.

There’s also the problem of the play all four of them are in, a rendition of Shakespeare’s Twelfth Night in which a bit of gender swapping itself is part of the story. But also what’s comical here is the whole issue of learning your lines and being expected to perform while in the wrong body.

The entire novel is told through Ezra’s perspective, which helps to keep track of the body swapping. Also helpful, is that when Wynona is in Ezra’s body, he refers to her as Wynezra, which is super useful in keeping everyone straight.

I was never confused or overwhelmed by the swapping and was delighted when the author turned up the tension a couple of notches by throwing in themes of gender fluidity and homosexuality into the works. This additional complexity worked well in this story, especially as various characters developed feelings for each other, and I thought that this added to the richness and depth of an already gripping plot.

What especially worked for me with his book was the hilarity that would ensue if you found yourself not only in the body of the opposite gender but of someone whose personality is night and day different from yours — and all this taking place while in high school. There were so many laugh-out-loud moments in this book, and I thought it was so much fun to go on this journey with Ezra and Wynona as they struggled to figure out how to live in each other’s bodies, and navigate the challenges associated with the other’s sex and personality.

I thought it was interesting how the story follows Ezra but is still able to give a more in-depth inside look into Wynona’s life through Ezra swapping bodies with her. Likewise, it gave Wynona a deeper peek into Ezra’s life with each of them developing empathy and understanding for the other person’s issues and baggage in the process. That being said, this is also a story about how both people manage to find new wisdom by being in the other’s shoes.

I like how this story teaches empathy and understanding. By using a body swap as a tool, the author gets to show the world through the other person’s eyes resulting in a comedic contemporary with a heartfelt emotional relationship between two people who couldn’t be more different. It also succeeded in illustrating how we cannot judge or make assumptions about others based solely on outward appearances and Norton provides a means of exploring one’s own preconceived notions about others without being preachy.

I also loved how the author dealt with sexuality in such a unique and interesting way, a way that I haven’t come across before in a novel. This book is a new twist on body swaps and with it come themes of sexual preference, gender fluidity, and figuring out who you really want to be.

There are also themes of family, friendship, forgiveness, grief, and self-acceptance that also rendered this quite a serious novel as well. What worked nicely for me was how Wynona and Ezra learned to be their authentic and best self at the end of the day.

I liked how real and authentic these characters felt to me. The author gives us real teenagers with real problems and in so doing, provides us with a cast of flawed, lonely, impulsive, and quirky individuals that are totally relatable.

Where I End and You Begin is as inventive as it is moving and ended up being a beautifully rendered story of love, attraction, sexuality, family, and friendship. It’s a clever, engaging, and wildly entertaining read, and I felt that the author did an excellent job of bringing his characters to life, allowing all of them to thrive in their complexity. All in all, a lovely, subtle thought-provoking blow-me-away kind of book that I’m still mulling over. Needless to say, I loved it.

A big thank you to Netgalley and Disney Hyperion for providing me with an advance reader copy of this book.

This title will be released on June 4th, 2019 but it is available for pre-order now. Link is below.

Purchase Where I End & You Begin from Amazon