You are here: Home / Suspense/Thriller / Review of What You Never Knew by Jessica Hamilton 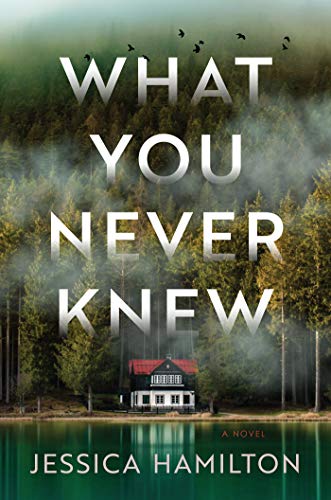 Told in alternating points of view between the living and the dead, Jessica Hamilton’s debut novel will be perfect for fans of THE LOVELY BONES.

Idyllic Avril lsland, owned by the Bennett family, where their hundred-year-old cottage sat nestled in acres of forest. Forty-year-old June Bennett believed that the island had been sold after the summer of her father’s disappearance when she was only twelve years old. It’s months after the shocking death of her older sister May in a fatal car accident, that June finds out that the cottage was never sold. Avril Island is still owned by the Bennett family and now it’s hers.

Still reeling from the grief of losing her sister, June travels back to Avril lsland in search of answers. As she digs, she learns that the townspeople believe her father may have, in fact, been murdered rather than abandoning his family in the dead of night, as she was led to believe by her mother. And that’s when she begins to notice strange things happening on the island–missing family possessions showing up on her bed, doors open when she had locked them closed. It takes June no time at all to realize that her childhood summers at Avril Island were not at all what they had seemed to be.

This is a haunting story told from the point of view of two sisters, one dead and one alive. After the death of her mother and of sister May, June finds out that she is now the owner of Avril Island, a place she hasn’t been to since her father’s sudden disappearance when they were children. Her mother told her that she’d sold the island years ago, so June was more than surprised that it was still in the family and now belonged to her. Unaware that her dead sister’s ghost accompanies her, June returns to the isolated family island cottage for the first time in decades to find out why her mother lied to her about selling the cabin. She also hoped to find out perhaps why their father left them that night, never to be heard from again.

She begins digging through decades worth of clues and uncovering all sorts of creepy family secrets in the process. Surprisingly, she learns that residents of the nearby town assume that her father may have been involved in a murder or may have been murdered himself rather than merely having “left them,” as her mother had always claimed. As she learns, her father was not the only one to go missing. The family caretaker, Will, also went missing a short time later.

What follows is a gripping, multi-layered mystery (with just a touch of the paranormal) as June slowly begins to put the pieces together and eventually learns the shocking truth of what really happened that night. The suspense really gets ratcheted up when strange things start happening at the cottage while June is there alone, such as dead birds at the door and phonograph records playing by themselves.

What we have here is a wonderfully crafted and thrilling tale about loss, grief, love, lies, betrayal, and dark family secrets that I absolutely loved. This was such a vivid and atmospheric book, which at times made me feel as though I were right there at the cottage along with them. I also thought the addition of May’s ghost as a narrator with a fun and innovative touch.

All in all, an exceptional read with an exciting plot and gripping characters with twists galore. Recommended!

Purchase What You Never Knew on Amazon