You are here: Home / YA Contemporary / Review of What If It’s Us by Becky Abertalli and Adam Silvera 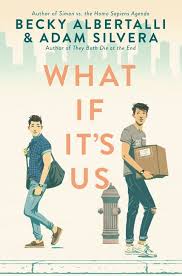 What If It’s Us follows two boys, Arthur and Ben. Arthur, who is from Georgia, is visiting NYC for the summer and is working as an intern in his mom’s law firm. Ben is recovering from a breakup with his boyfriend Hudson and attending summer school. The two meet one day at the post office, where Ben is mailing back his ex-boyfriend’s things. They chat, and the two immediately hit it off. Unfortunately, chaos erupts inside of the post office, and before Arthur can get Ben’s phone number, he has disappeared.

From there, we follow the two young men as they attempt to find each other, which of course, they do; otherwise, we wouldn’t have much of a novel, now would we? In fact, it almost seemed as though the Universe was conspiring in their favor to bring these two together — and the question of “destiny” comes up many times in conversation.

But it’s not a smooth ride for our two protagonists. The two of them go on a series of bad dates all fraught with drama, hurt feelings and a series of misunderstandings. There are all sorts of awkwardness and complications: strange relationships between their friends, the unusual relationships between each of the boys and their friends, there’s Ben’s ex-boyfriend Hudson who Ben may or may not be over, and both sets of parents.

Arthur and Ben do embark on quite a roller-coaster of a relationship with them both trying to “make it right” before Arthur has to leave at the end of the summer. What I found especially interesting was the friendship dynamics in the books. The authors did such a good job with them that I found them almost more interesting than the central romance. I especially enjoyed Dylan’s character, who was Ben’s best friend. In fact, I would love to see a book featuring him as the main protagonist.

The story is told in alternating points of view, so Arthur gets one chapter, Ben the next, then Arthur and so on. I found this more than a bit challenging at times as it was often difficult to tell the two boys apart. The problem is that I don’t think their characters were different enough and because of that, I often forgot who was speaking. So I had to flip back to the chapter heading to see whose chapter it was which annoyed me and yanked me out of the story on many occasions.

I know that a lot of people hate pop-culture references in their fiction novels so if you’re one of those people, you may want to stay clear of this one. There were numerous references to Hamilton, Dear Evan Hanson and lots of Harry Potter. Though pop-culture references don’t usually bother me, I think they may have overdone it a bit, especially with the Hamilton references. I found myself thinking a few times, “Okay, enough already with Hamilton.” In this way, the book became a tad repetitive in places.

But all in all, “What If It’s Us” is a super-sweet coming of age YA romance about two boys finding love and in so doing discovering themselves. So I ended up liking this story a lot — but not loving it as I had hoped. I don’t know; perhaps I was expecting a little more from these two authors. It was cute with likable characters but not really earth-shattering. I enjoyed the romance between these two boys but outside of the romance, there wasn’t a whole lot going on — there weren’t any additional plot lines.

So though it was an enjoyable story and I am glad I read it, I didn’t love it as much as I had hoped. Now to be fair, I’m not typically a fan of romancey contemporaries so I’m probably not the ideal target reader. But if you enjoy YA contemporary novels that are heavily focused on the romance, then you may very well enjoy this book more than I did.

Purchase So What If It’s Us at Amazon

Purchase So What If It’s Us at The Book Depository