You are here: Home / Fantasy/Urban Fantasy / Review of Warbreaker by Brandon Sanderson 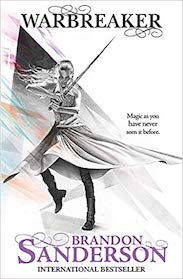 “My life to yours. My Breath becomes yours.”

Warbreaker is a story that follows two sisters who are princesses, a handful of mercenaries, a powerful, deadly yet mysterious warrior, a flippant atheist god who seems to take nothing seriously, a group of other gods and goddesses all of whom have returned from the dead and finally, the God King of this world — the ultimate ruler.

The two kingdoms in this story are Idris, from where the two princesses come and Halladren, ruled by the silent yet powerful and fearsome God King. These two cities have been barely tolerating each other for three centuries.

Now the King of Idris needs to make good on his daughter’s marriage contract; you see, one of his daughters has been promised to the God King with the goal being to produce an heir to the God King while maintaining the peace treaty between the two nations. But things turn out a little differently than expected when one daughter is on route to Halladren to marry the God King and the other has undertaken a personal rescue mission to save her sister from the horrid ruler.

The rest of the story takes place in Halladren, where we’re introduced to living gods called The Returned because they have returned from the dead. Every once in a while, someone comes back from the dead and when they do, they are then worshipped as Gods.

We’re also introduced to the system of magic called Breaths revolving around breath and colors. A breath is a chromatic essence of a person – like part of the soul — and each person is born with one breath, which can be given by one person and taken by another. The person who gives away his or her breath then becomes a “drab,” in which the world appears gray and pretty much colorless. The person receiving the breath is bestowed with heightened senses in which they’re able to discern subtle distinctions of color and sound. They are also infused with magic, making them capable of animating objects such as clothing, rope, dead squirrels and even little men made of straw and commanding them to do your bidding. This system is called Awakening, and a person needs a lot of Breath to perform an Awakening.

There’s also the mysterious Vasher to whom we’re introduced immediately in the first chapter, and he repeatedly appears throughout the book. The thing is, is that we have no idea who he is or what he’s up to. Is he trying to assassinate someone? Start a war? The more he appears, the more is revealed.

As political chaos, conspiracies, backstabbing, and unrest in the streets begins brewing, we learn that someone is indeed trying to start a war and it’s up to only a few people to prevent it: a god who doesn’t believe in his own divinity, a princess who overnight become unimportant, another princess who overnight become all-important, an immortal wielding a sentient dagger whose primary goal is to kill evil, and the God King himself.

Given that magic system in this story revolves around colors, it’s no surprise that Warbreaker is a book vivid and vibrant with colors. I found it easy to picture the scenes in my head, and the lush descriptions really helped to give the novel a strong sense of place.

Additionally, the plotting and world-building were outstanding. In this story, Sanderson gives us a rich world filled with riveting history and mythology, fascinating politics, an intriguing mystery and numerous twists resulting in a truly immersive read. I especially enjoyed the political system in which the common people actually interacted one-on-one with the gods.

The gods themselves were also captivating, and I found it interesting how they remembered nothing from their past lives after they were “Returned” so in essence, they had to reinvent themselves when they began their second life. I loved the whole concept of “The Returned” and found it fresh and original. I also thought that the mythology surrounding the Court of Gods and the God King was utterly fascinating and would have loved to have learned more about them.

But the real treasures of this story were the rich, vivid and life-like characters:

The character development in the book was terrific, especially with Siri, Vivenna, and Lightsong. It was fun seeing their growth as the tale progressed.

I thought there was a lot more humor in this book than in the other Sanderson novels I’ve read and caught myself laughing out loud several times during the story. Lightsong’s witty and wry humor was particularly fun, especially during his exchanges with the other Returned. I also enjoyed the endless banter between the two male mercenaries and even the exchanges between Vasher and his deadly talking sword were often amusing.

As is the case with other Brandon Sanderson novels, the magic system in Warbreaker, which uses a combination of breath and color to bring objects to life, was phenomenal. There were some fascinating scenes involving animated objects and zombie-like characters. The author certainly has a knack for creating creative magic systems that are intricate, clever, unique yet easy for the reader to comprehend.

Additionally, I liked the idea that magic is costly and not easy to master. I also liked how everyone has the potential to do magic in this world and not just a select few — it all depends on how many breaths you can gather up. The more breaths a person acquires, the longer they live and the more magic they can do. It’s also worth noting that a breath cannot be taken forcefully — it must be given freely.

Susbron, the God King, remained pretty much a mystery through to the end of the story. We learned a little bit about him but not nearly enough to be satisfying. I wish the author would have delved a little more deeply into his story and history. Likewise, I wish he had gone a little more into the history of the Manywar, the Returned and the Court of Gods.

The book also took a while to get going. My experience with Brandon Sanderson novels has shown me that they’re often slow-starting as the author spends a good portion of the book on world-building as the characters and story begin to take shape. So in this way, the middle dragged a bit. However, I felt the slow-buildup was totally worth it as the story took off like a bullet during the last 20% or so of the book.

I really didn’t have any niggles with this and ended up loving it. Like the other Sanderson books that I’ve read, the world in Warbreaker is infused with a captivating magic system, compelling political scheming and plotting, unique and interesting religions and such rich history and mythology that I couldn’t help but fall in love with this novel. Sanderson expertly intertwines religion, culture, mythology, and history into a genuinely compelling narrative.

There were so many interesting themes that ran throughout the novel: religion, sacrifice, bravery, intolerance, self-discovery, compassion, empathy, and redemption. It also has an excellent cast of believable characters, a plausible world, an intriguing political system, and a thoroughly satisfying ending. I loved this epic, compelling, complex story of Siri, Vivenna, Lightsong, Vasher, and Susebron as they struggle through emotional, physical, and moral challenges. The intrigue and excitement grow steadily resulting in a perfectly balanced story which by the end, proved to be difficult for me to put down. All in all, a tremendous book that I absolutely loved.

Purchase Warbreaker at The Book Depository