You are here: Home / Science Fiction / Review of Upgrade by Blake Crouch 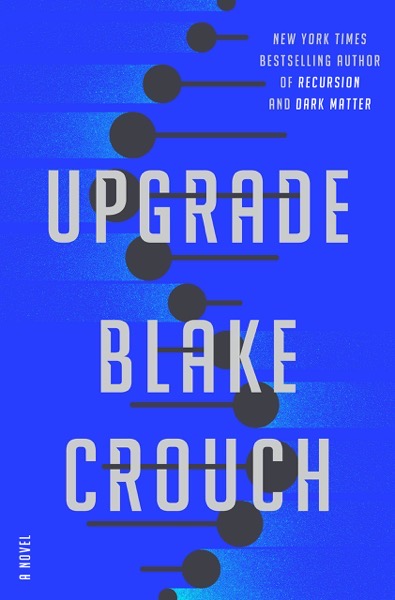 “You are the next step in human evolution.”

But before long, he can’t deny it: Something’s happening to his brain. To his body. He’s starting to see the world, and those around him—even those he loves most—in whole new ways.

The truth is, Logan’s genome has been hacked. And there’s a reason he’s been targeted for this upgrade. A reason that goes back decades to the darkest part of his past, and a horrific family legacy.

Worse still, what’s happening to him is just the first step in a much larger plan, one that will inflict the same changes on humanity at large—at a terrifying cost.

And even as he’s fighting, he can’t help wondering: what if humanity’s only hope for a future really does lie in engineering our own evolution?

Intimate in scale yet epic in scope, Upgrade is an intricately plotted, lightning-fast tale that charts one man’s thrilling transformation, even as it asks us to ponder the limits of our humanity—and our boundless potential.

“We don’t have an intelligence problem. We have a compassion problem. That, more than any other single factor, is what’s driving us toward extinction.”

I’ve loved everything I’ve read by Blake Crouch (especially Dark Matter and Recursion), and this novel was no exception. This bold and imaginative science fiction/speculative fiction story takes place in the not-so-distant future after a human-made pandemic caused by a failed experiment that wiped about a good portion of the earth’s population. The story follows Logan Ramsay, an agent with the Gene Protection Agency who, after being exposed to a strange chemical tied to genetic engineering, begins to change….to evolve both physically and mentally. Books that were once out of his level of comprehension are now accessible. He knows what people are going to do and say before it happens. His bone density level increases, as does his muscle mass, pain tolerance, memorization ability, and concentration. But though he gained a lot in the “upgrade,” he also lost pretty much everything in the process.

What I enjoyed about this scientifically-fascinating book is that it reads like a thriller with plenty of heart-in-your-throat, non-stop action. It’s an adrenaline-filled tale that certainly kept my eyes glued to the book’s pages. I eagerly kept turning the page in order to find out what was happening to Logan and why.

The author has an incredible ability to put the reader firmly in the mind of the main character so that Logan’s thoughts became my thoughts—Logan’s actions became my actions. In this way, the book is exceptionally immersive. Additionally, the complicated plot has a plethora of layers to it, and trying to figure it out was like putting the pieces of a puzzle in place.

As Logan continues to evolve, he begins to wonder how much of his humanity is even left—that is to say, at what point does a human cease being a human? I also enjoyed the conversation around DNA research and science, human evolution, and the survival of the human species. The story also raised some interesting questions about how far we should go to save humanity and whether there is a point where we have to draw the line. And though the author does introduce somewhat complicated scientific topics, they in no way take away from the thrilling narrative.

All in all, this was an intense, wild, adrenaline-filled ride with relentless pacing about a hero who’s trying to save the world from the villain who’s trying to destroy it. I adored all the twists, turns, and surprises, as well as the complex questions that the novel caused me to ponder. A volatile, mesmerizing, and unpredictable story that I loved!

A huge thank you to NetGalley for providing a review copy of this book.