You are here: Home / Suspense/Thriller / Review of Unspeakable Things by Jess Lourey 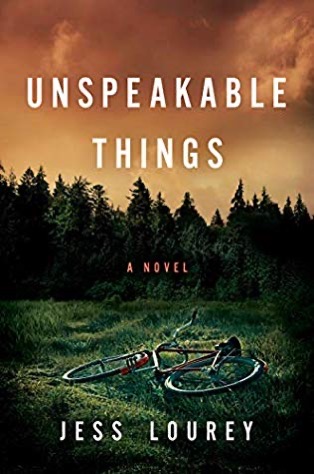 This story is based on true events that take place during the 80s in a small Minnesota town and is told from the point of view of a 12-year-old girl named Cassie West. Her life, however, is far from innocent and idyllic as her parents throw strange parties with people indulging in…shall we say…very adult activities. There’s also the fact that Cassie lives in constant fear of her father coming up the stairs to her room at night. Additionally, because of their father’s erratic and often dark moods, Cassie and her sister try to stay under his radar at home as much as possible, as he is definitely someone to be feared. I found him to be a truly scary monster of a man whose subtle manipulations intrigued, disgusted and terrified me.

But Cassie’s life really changes, and the atmosphere of the story takes an even more chilling turn once some when local boys go missing. The culprit, who wears a hockey mask, abducts the boys and then returns them, but they are different afterward — they’re sullen and violent. Some people claim they’ve been molested. The rumors and finger-pointing begin as neighbors accuse each other, and the town’s dangerous secrets begin to surface. So when Cassie’s own sister begins to undergo a dark change, she knows she must figure out the dark mysteries in her life and her town if she and her sister are to survive. So in this way, the story ends up being one of self-preservation.

What follows is a pitch-dark, gut-wrenching, and nightmarish portrayal of a teenager whose childhood is stolen by the monsters in her life — the sinister child-predator who’s committing unspeakable crimes in her town and the monster under her own roof. It’s also worth mentioning that the sheriff and many of the town’s locals aren’t much better. There were times that the story felt so intense and anxiety-provoking, that I had to stop and breathe for a minute. The tale has an ever-increasing darkening atmosphere that increased the sense of foreboding and menace as we moved forward through the narrative.

This book ended up being completely different than what I expected. I went into it thinking it would be a book about a kidnapper/child molester, but it ended up being more about Cassie and the horrible secrets right under her own roof. What I especially enjoyed about Unspeakable Things, is that Cassie never explicitly describes what’s going on at home. She drops a hint here and a glimpse there, encouraging us to use our own imagination and try to piece together ourselves what’s going on. This aspect of the story certainly got my imagination churning and, in the process, led me into some very dark places.

Now though a 12-year-old girl narrates this haunting tale, this is definitely not a children’s book. It’s super dark and disturbing on many levels. Many terrible things happen, and they happen to children. So sensitive readers be warned.

My only quibble with the book was that I found the ending a tad abrupt though the journey getting there was fun. The author does have an epilogue on her website, which I thought rounded off the story nicely. But be sure not to read the epilogue until after you’ve finished the book as it does contain spoilers.

All in all, this book has the perfect balance of mystery, spine-tingling suspense, and wonderfully detailed descriptions that kept my eyes glued to the page, and though it was highly disturbing and mesmerizingly twisted, I ended up enjoying this story.