You are here: Home / LGBT Romance / Review of Unraveling by Rick R. Reed 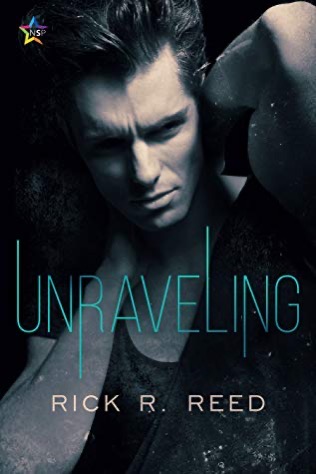 Unraveling follows our main character Randy who has lived a lie most of his life. He loves his wife and his adorable son, but he has a dark secret: he’s gay, and it’s tearing him apart. At his wife’s urging, he finally comes clean. His wife is supportive and encourages him to get out in the world and discover who he is.

So he does and meets John, a paramedic who, though comfortable being gay, isn’t happy with his life and is looking for a change. But even though John is attracted to the man, Randy being currently married and newly-out has set off John’s internal warning alarms, and he’s hesitant to enter into a romantic relationship with him. It’s about at this point that Randy’s life takes an extreme turn, and before long, things begin to unravel quickly.

I enjoyed the fact that this novel took place in the 80s as it was during this time that I came of age as well, so in this way, it was quite nostalgic for me. I also had several friends who went through a similar event as our main character Randy — coming to terms with their sexuality and going through a divorce in the process. I thought the author handled that aspect of it wonderfully and illustrated nicely that pain and anguish to all involved. The fact that the story is told from a variety of POVs — Randy’s, Violet (the wife), and John (the boyfriend) — added an extra depth and richness to the story.

Unraveling was such a powerful story of acceptance, especially self-acceptance. Though this is sort of a love story, it isn’t your typical gay romance. In fact, passion isn’t the main focus of the story. Instead, it’s raw, emotional, and quite heart-wrenching in places, especially the self-hatred that our main character exhibited and the homophobia of certain family members. It’s a hard-hitting story about the prejudice that gay people have to deal with as well as the pain that leading an inauthentic life can cause. I liked how the story examined the effect of Randy’s coming out on his wife and son and showed how such a decision impacts everyone around you.

I think this is such an important story to be out in the world. In fact, I know of someone who is currently going through a similar situation as Randy now; hence those issues of acceptance, self-hatred, fear, and confusion about one’s sexuality are still very real concerns even today.

Unraveling is such an amazing, thought-provoking, and gut-wrenching read with vivid and wonderfully rendered characters. Though parts of it were dark and gritty, this book hit me right in the heart, and I found it engaging, poignant and ultimately hopeful — and the lovely epilogue was the cherry on top of this tender and heartfelt story.