You are here: Home / Fantasy/Urban Fantasy / Review of Under the Whispering Door by TJ Klune 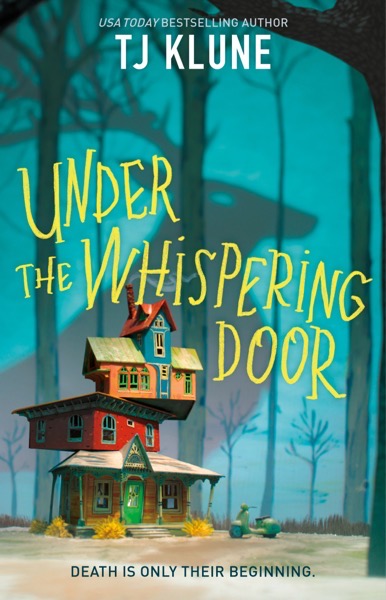 TJ Klune is one of my favorite authors, so I was super excited when this book came to my attention. Once again, he did not disappoint.

Under the Whispering Door is a heartwarming contemporary fantasy about finding yourself. It follows an unlikable, ruthless and driven lawyer named Wallace Price, who is more than a bit surprised (but mostly shocked) to find himself at his own funeral. Apparently, Wallace has died and is none too happy about it. This becomes even more evident when a reaper named Mei shows up to take Wallace to the next stage of his journey.

But instead of taking him to the afterlife, the Reaper brings him to a small tea shop in a remote village called Charon’s Crossing when he meets a charming man named Hugo, the proprietor who is also the ferryman of souls. Hugo’s job is to help souls get ready for crossing over, which turns out not to be such an easy chore for the angry and bitter Wallace Price. But, of course, anger and denial like Wallace’s isn’t anything new for Hugo — he’s seen it before. But he definitely has his work cut out for him as he attempts to lead Wallace out of the darkness and into a more gentle understanding of the mysteries of life.

So with Hugo’s gentle guidance — as well as that from Mei (the Reaper) and Hugo’s ghostly and mischievous grandad Nelson, Wallace begins to understand all that he missed from life, and his outlook slowly begins to change — especially once he learns that it’s never too late to start anew.

It was so delightful to see Wallace’s heart begin to warm as the other charming and quirky characters slowly got under his skin. I loved seeing him grow as a person, and as he did, the more likable and relatable he became. I was surprised by how much I grew to care about this formerly cruel and despicable character, and my heart warmed to see him form meaningful relationships with the other characters in the book (including Apollo, the ghost dog) and witness him making a genuine effort to become a better person.

The author handled some pretty tough topics in the book, such as death, PTSD, suicide, and grief, all of which were handled compassionately and delicately by the author. But additionally, the author’s familiar wit, humor, and charm shine through, resulting in a beautiful heartfelt story that is both moving and thought-provoking. It’s a hard-hitting story that’s at times sad and raw, but that teaches some valuable lessons as the plot unfolds.

All in all, Under the Whispering Door is a delightful heart-tugger of a story about grief, regret, death, love, loneliness, acceptance but most of all, about found family. It’s the kind of story that causes you to laugh out loud in some places and brings a tear to your eyes in others, and I still find myself ruminating and contemplating it many days later. I love a good story about hope, redemption, and second chances, and that’s what we get here with this gentle tale.

As a reader, I found this to be an utterly rewarding journey. There’s also a sweet romance that was the cherry on top of this magical story. Oh, and that ending — it was perfect!

The book will be released on September 21 but is available for preorder from online retailers.

Link to Preorder from Amazon