You are here: Home / YA Fantasy/Urban Fantasy / Review of Twice Dead (Necromancer’s Song) by Caitlin Seal 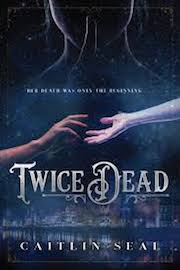