You are here: Home / YA Fantasy/Urban Fantasy / Review of Trinity of Bones by Caitlin Seal 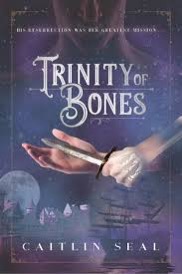 This is the second book in the Necromancer’s Song series and follows Naya, the daughter of a sea merchant captain, who was murdered and then brought back to life as a wraith by a Necromancer.

In this book, she finds herself back in her country of Talmir, a place she never thought she’d ever see again given that Talmirans absolutely loathe the undead. Because of the events that took place in the last book, she’s also marked as a traitor to Talmir.

There’s quite a bit going on in this book. First and foremost, she has to rescue Corten, fellow wraith and lover, from a dark, dark place where there are shadows who wish to claim him permanently — and time is quickly running out for the both of them. But in order to save him, she has to find and obtain missing secret necromancy journals, which on the surface appears to be a nearly impossible task.

She’s also sucked into an intricate political web where she’s forced to form new alliances in order to survive though she’s not quite sure who she can trust. Like the last book, there are plenty of secrets, lies, and layers of treachery, but this time, the entire world is peril, a tidbit we don’t learn about until nearly the end of the story. The plot and the continuous action enthralled me right until the end of the book. I felt that the author did an excellent job portraying the political tension between the two countries, as well as the moral disagreements and mistrust.

I also enjoyed the dual POVs in the book, going back and forth from Corten to Naya, and witnessing the feeling of ever-growing desperation that both of them were experiencing. I also liked how much Naya’s character has grown since the first book where she’s transformed into quite a decisive, less gullible, and courageous young woman (or young wraith, as it were). She’s spirited, headstrong, and alert and has the backbone and personality to complement and balance many of the other no-nonsense characters, includes the stodgy Talmirans. I also was surprised by the “bad guys” in the story, which totally took me by surprise.

All in all, a mesmerizing, action-packed multi-layered adventure story with a unique and compelling spin on necromancy. The narrative never bogs down, and I was on pins and needles pretty much the entire time I read this book. My only niggle was the abrupt ending. Though it wasn’t exactly a cliff-hanger, it was pretty darn close, and because of that, I knocked off one star. Still, a super-fun read, and I’ll definitely be picking up the third in the series.

Purchase Trinity of Bones on Amazon

Purchase Trinity of Bones on The Book Depository