You are here: Home / Middle Grade / Review of Thomas Wildus and the Book of Sorrows by J.M. Bergen 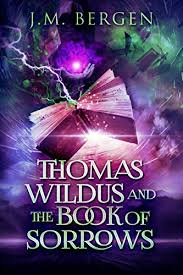 A Boy and His Magic

Thomas Wildus and the Book of Sorrows is a middle-grade fantasy that follows 13-year old Thomas Wildus whose father, shortly before disappearing when Thomas was 6, told Thomas:

Magic is real, Thomas. No matter what happens, always remember that magic is real.

So now, seven years later, Thomas has neither forgotten nor has outgrown his interest — nor his belief — in magic.

In the beginning pages, we see the kind of person Thomas is through his interactions with others: the affectionate teasing and joking with his mom (and her nickname for him of “sweet boy”), his stepping in to help when another kid is being bullied, his close friendship with Enrique and Enrique’s siblings, all of which leads us to the conclusion that Thomas is kind, helpful and empathetic towards others — he’s the kind of kid who steps in to do what is right.

Young Thomas’s life takes a dramatic turn one day when he sees a curious old bookshop that he’d never noticed before. Given that he’s always on the lookout for books about magic, he decides to go in and immediately gravitates to the magic section and goes through the shelves stocked with dusty old books. An odd little man approaches Thomas, the bookshop proprietor, and after Thomas asks for books on “real magic”, the man offers Thomas a tome called The Book of Sorrows. According to the man, the book is quite ancient and comes with a set of rigid instructions. The man will lend Thomas the book so as long Thomas promises to strictly adhere to the instructions, especially the stringent rule of secrecy. Thomas agrees and excitingly, takes the book home.

Thomas dives in what turns out to be a rather disturbing story. What’s really interesting here, is that strange things begin to occur once he starts reading the book. For one thing, the cover of the book slowly begins to change and it becomes clear to Thomas pretty quickly that there is definitely a paranormal aspect to the book.

Things get even stranger when Thomas can’t shake the feeling that he’s being followed and then notices that he is in fact, being tailed and tracked by a menacing dark van. Then, an old professor friend of his father’s suddenly comes to visit offering to tutor Thomas in Physics and there are numerous strange people that Thomas keeps seeing around the bookstore, some of which have an unexplainably unsettling effect on him.

Thomas figures out that it is his possession of the book that has caused so much attention and without even realizing it, he’s soon drawn into a world of mystery and magic. I enjoyed the slow revelations here as Thomas delves deeper into the book’s disturbing story with the book guiding him into a strange new world. Through the story and his interactions with the shopkeeper, it is slowly was revealed to Thomas that he himself has magical abilities just waiting to be discovered. Moreover, he learns that there is also a secret, a somewhat dark family history and a destiny awaiting him.

That is, if he can stop a powerful and dangerous magical enemy from arising and destroying everything he holds dear.

A Couple of Niggles

Though the story is interesting and action-packed, it does get bogged down at times by an excessive amount of detail. A good portion of the narrative is spent eating, walking up, visiting with friends, reading, sitting on the bus, playing basketball, and the like. While I do recognize the importance of world-building, I felt there were too many details that didn’t relate to the plot or add to the story. So bearing this in mind, the story does take a bit to get going.

I also found the snippets from the Book of Sorrows difficult to read. I know the author was trying to convey the feeling of antiquity, but the “eth” and “est” suffixes rendered the text a tad challenging to comprehend. An example:

“Yet the tale endeth not, for in the eye of Isham’s mind, the beast emergeth, like unto life…”

This wasn’t that huge of an issue, however, because Thomas summarized each of the excerpts so the reader could bypass them if desired.

This was a wickedly fun and richly imaginative middle-grade urban fantasy with a compelling plot and endearing characters, who had quite interesting backstories. From the moment Thomas enters the bookstore I was hooked and couldn’t wait to find out the mysterious book’s secrets. This little gem of a story has magic, action, mystery, intrigue and rollicking adventure, and held my interest until the wild ending.

Initially, I was fearful that the book was going to end on a cliffhanger given that I was nearing the end and there was no resolution in sight. Luckily, I was wrong, and the story ended with a satisfying — and heart-stopping — conclusion.

I understand that there are more adventures yet to come so I can’t wait to delve into the next book. Recommended!

Purchase Thomas Wildus and the Book of Sorrows on Amazon