You are here: Home / Uncategorized / Review of Things in Jars by Jess Kidd 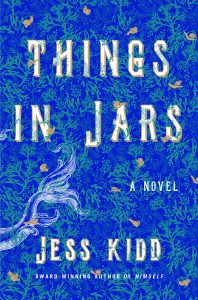 This is the second book by Jess Kidd that I’ve read, the first being “Mr. Flood’s Last Resort,” which I loved.

Things in Jars is a Victorian-era thriller that follows the red-haired eccentric pipe-smoking Bridie Devine, who is referred to as “female detective extraordinaire.” It’s funny, I read her name in my head as “Birdie” during the entire novel. It was only after I finished it that I realized it was Bridie and not Birdie. So if I call her Birdie, bear with me.

So Bridie has been called in to solve the kidnapping of a little girl named Christabel Berwick, the secret daughter of Sir Edmund Berwick, a powerful and wealthy baronet.

Yes, I did say secret — nobody supposedly knows about her, meaning that he must have had the little girl locked up in the house all these years. Smells mighty suspicious, to me. In fact, he insisted that Bridie not call the police because he doesn’t want them involved.

Moreover, Christabel is reputed to have some sort of supernatural powers, so she’s captured the attention of all sorts of unsavories, especially criminal collectors of “curiosities.”

What’s fun about this book is that Bridie is assisted by her 7-foot tall bearded lesbian parlor maid called Cora, a former circus giantess and a ghost named Ruby Doyle, a champion boxer who has living tattoos on his skin that reflect his mood a champion boxer.

And that’s just a sample of some of the eclectic and imaginative characters in this story.

When Bridie first encountered the ghost, she informed him that she doesn’t believe in ghosts, and he said something to the effect of “Yet, here we are,” which gave me a cackle.

As Bridie’s search intensifies, she uncovers a lot more than she had bargained for, such as mythological sea creatures.

So in this way, the book incorporates superstition and Irish folklore into the story, adding extra intrigue to it. I loved the fantastical elements of this story.

We also enter into the criminal underbelly of Victorian England, complete with nefarious types obsessed with collecting grotesque oddities both living and dead, as well as those performing unethical medical research and practice, dodgy doctors, grave robbers, creatures of legends, anatomists, sadists, murderers and of course, strange things in jars.

The narrative is told from two different timelines, the present, during which Bridie investigates the little girl’s disappearance, and Bridie’s childhood, through which we learn how she came to possess her current skills and the people, both good and bad, who’ve had an effect on her life.

So I really, really enjoyed her backstory on Bridie and felt that it really added an extra emotional impact of the story, especially once Bridie encountered the ghosts from her past.

There was always a sense of menace and eerie unrest, and the shadowy-feeling story does dip into some pretty dark and disturbing places.
But though parts of the book were dark and sometimes even a tad brutal, a good majority of it was fun and playful, some parts even frivolous and silly, which got me to chuckling on more than one occasion.

One running joke throughout the story was Bridie’s ugly bonnet, which everyone seemed to comment on. Saying such things as “My god woman, where did you get such an ugly bonnet from?” I also especially loved the witty banter between Bridie and her ghost companion, Ruby.

Now it’s worth mentioning that in a previous and recent kidnapping case, Bridie was too late — by the time she found the child he was dead. So she’s a little bit guilt-ridden, and she is determined that this is not going to happen this time around. Thus, there is a desperate race against the clock to find the girl before something terrible happens to her.

This Dickensian book about dark and gritty filth-filled London was both atmospheric and ethereal and provided an excellent sense of place. I loved the detailed descriptions of Gothic London, which really came alive on the pages.

The lyrical prose was beautiful. I also thought the magical realism aspect of the story was extremely well done — mysterious, dark, creative with a touch of humor. The author really crafted a memorable and unusual world here.

I adored Bridie’s larger-than-life character, who goes from orphaned street urchin, where she worked with a man named Gan as a resurrectionist (that is to say, they sold body parts from corpses) — so she went from that to a medically-trained Sherlockian detective.

So Bridie — she is no-nonsense, tenacious, sassy, tough-as-nails, clever, observant, nearly fearless. Hell, she even performs minor surgery when needed. And her habit of cross-dressing and smoking “questionable” tobacco concoctions endeared her to me as well.

The eccentric, unique, and colorful supporting characters are also a delight. The author describes their characteristics and motivations vividly, and in so doing, really brings them to life on the page.

They were so much fun to watch, even the nasty low-lifes, rakes, and rogues, all of whom had a quite complex and intertwining relationship. Speaking of low-lifes, I loved the depraved, predatory, and dastardly villains in the story. They were delightfully repulsive.

There are so many elements that come together in this bold story: there’s folklore, gothic historical fiction, magical realism, the paranormal, and a mystery to solve. Sensitive readies are warned, however, as there are some shocking and gory descriptions of murder scenes as well as those things in jars.

But yeah. This is quite the imaginative and fantastical journey that I found utterly enthralling. I hope we see Bridie and Cora again in future books.

Purchase Things in Jars from Amazon

Purchase Things in Jars from The Book Depository