You are here: Home / Historical Fiction / Review of The World That We Knew by Alice Hoffman 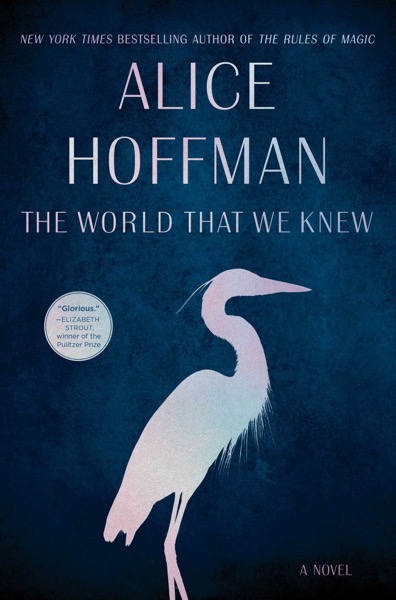 The World That We Knew is a historical fiction story that opens in 1941 in Berlin during the time when the Nazi Regime is coming into power. Aware of how bad things are becoming for Jewish people, a woman named Hanni visits the local Rabbi and begs him to create a Golem — a mystical Jewish creature made from mud and clay — to protect her daughter. The Rabbi refuses, but his young daughter Ettie overhears the conversation and agrees, in secret, to create a Golem for Hanni’s daughter Lea. So Ettie accomplishes what is said that only men can do, and she brings her special golem to life. The golem is given the name of Ava, and she (it’s a female golem) is sworn to protect Lea. Lea and Ava flee Germany for Paris, but as it turns out, there aren’t safe there for very long, and soon, they are running for their lives.

Though there is a magical realism aspect to the story, this is far from being a fairy tale. It’s a heartbreaking story as Lea, Ava, and the other characters in the story witness one horrifying atrocity after another at the hands of the monstrous Nazis. Through the author’s brilliant storytelling and memorable characters, we really get a feeling for the depth of the suffering that the Nazis imposed on innocent people.

And that’s what really made this novel stand out for me — it was the deep, intense, and meaningful relationships between the characters and how their lives all intertwined and collided. I also thought that it was a heartfelt tribute to those brave souls who, in a time marked by evil and death, risked their lives to help the many Jewish people to safety.

In these characters, we see heart-warming kindness, beauty, and sacrifice as they all fought the evil in their own way: by saving lives. In this way, the author gives us the best of humanity in these heroes juxtaposed with the monstrous insanity of the Nazi regime. We have a doctor who treats resistance fighters, nuns who protect refugees, underground groups who lead people to safety across the borders, individual people who house and feed the persecuted, and many, many more.

This was such an emotionally engaging story, and I teared up many times throughout. I’ll admit that there were many passages that I found difficult to read – passages about those who didn’t escape, those who were rounded up and taken to the death camps, and those allies and resistance members who ended up murdered. And yes, many of our favorite characters ended up among the dead. But though it was undoubtedly bleak in parts, there was always the thread of love, hope, and humanity at its core — all of which kept people moving forward even in those darkest of times.

In the midst of these chilling atrocities, the author shows us the kindness, compassion, and love of the many honorable characters and in so doing, transforms this into an uplifting and moving story. The theme of love was also quite prevalent throughout the story — the characters’ love for each other and their love for life. The book explores themes of cruelty, war, humanity, of mothers and daughters, faith, fear, sacrifice, and loss but also illustrates courage, bravery, love, and humanity as well as the extraordinary resilience of the human spirit.

Though Ava the golem played a big part in this story, the horror that the Nazis brought down upon millions of people was always at the forefront of this novel. The use of the golem as a plot device in no way dilutes the unimaginable crimes of the Nazis, who were referred to as demons in the story — living monsters. What was interesting is that Ava, the actual “monster” in this story, turns out to be more human than many of the humans, and she ends up representing for Lea a mother’s love. I felt that the magical realism aspect actually helped the reader to get through some of the more gut-wrenching and emotionally overpowering scenes. In addition to the golem, there was the appearance of The Angel of Death and of a dancing Heron, both who played fascinating roles in the story.

The book is also meticulously researched, and I learned a lot about this time period that I didn’t know before. Hoffman stated that she traveled to France and visited many of the places that hid refugees. She also met with and interviewed Holocaust survivors both in France and in the United States, and I was surprised by the amount of history that the author incorporated in the story.

All in all, The World That We Knew is an intense, sometimes brutal, no-holds-barred historical fiction novel of courage and sacrifice featuring characters unlike any you’ve ever seen. In my opinion, the beauty of the story lies in the successful balance between Historical Fiction and Mythology, and the author blends the ‘real’ and the mythic seamlessly.

Yes, it will also break your heart in a million pieces but then will slowly glue it back together, so in this way, it’s simultaneously heartbreaking and heart-mending with an underlying current of hope throughout. Additionally, I found Hoffman’s writing to be evocative, eloquent and stirring, and is overflowing with gorgeous imagery and lyrical prose. Though heavier than some of her other novels, I’m so glad that this book crossed my path, and for me, it’s a solid 5-star read.

Purchase The World That We Knew on Amazon

Purchase The World That We Knew on The Book Depository