You are here: Home / YA Fantasy/Urban Fantasy / Review of The Wicked Deep by Shea Ernshaw 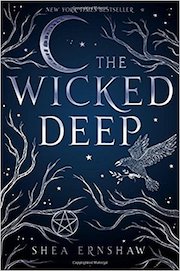 The story follows our main character, Penny, who lives with her mother on a small island in a town called Sparrow. Now Sparrow could be just like any other little island town except that it has a rather dark history.

Two centuries ago, the Swan sisters, Marguerite, Aurora, and Hazel were sentenced to death for witchcraft. Instead of being hanged or burned, the sisters’ hands were bound, rocks were tied to their ankles and they were drowned off the shore of the island.

When I first picked up this book, I thought that the sisters were actually witches but as it turns out, they really weren’t. They were all incredibly beautiful and alluring young women, and their only real crime was seducing the men of Sparrow (two of the sisters were especially fond of sex). So basically, what we have here is a vicious case of slut-shaming leading to the murders of three innocent girls.

But that was not the last the small town heard of the Swan sisters. As it turns out, every summer the sisters rise from their watery graves and return in order to take revenge on the town that wronged them.

Each of the sisters takes over and inhabits a body of a local girl. Once in human form, the sisters then each drown at least one boy between June 1 until June 21, the summer solstice. During that time, no boys — local or tourists — are safe.

You see, once a Swan sister has her sights on a boy, he is pretty much powerless to resist and will willingly follow the sister into the sea ultimately leading to his death.

Oh, and nobody knows which local girl is possessed because while living in their host’s body, the Swan sister is able to absorb the personality and all the memories and mannerisms of their host, so it’s nearly impossible to tell who has been possessed.

But despite the danger, tourists flock in from all over in the hopes of perhaps catching a glimpse of the infamous Swan sisters who have killed innocent boys every summer in the town for the past 200 years.

There’s a New Boy in Town

So back to our main characters, Penny. So on the eve of the sister’s yearly return, a boy named Bo Carter arrives in Sparrow, utterly oblivious to the dangers he has just walked into.

Now there was kind of an insta-love thing going on with Penny and Bo which annoyed me a bit, but the story was interesting enough that I was able to overlook it, especially when we learn that they both have secrets that they are keeping from each other.

But still, they moved to the lovey-dovey stage really quickly. So they get together romantically but as we can guess, one of the sisters sets her sights on Bo, and it’s up to Penny to protect him.

The Past and the Present

I enjoyed how the story weaved back and forth between present day and the past when the sisters were still human, and it slowly unfolds how things ended up turning so tragic for them and the town. It was nice to see the human side of the Swans and not only the raging, vengeful side, which helped the reader to kind of understand where they were coming from.

The town drama sucked me in as well. Once boys began drowning, mistrust spreads like wildfire as everyone, the reader included, tries to figure out which girls the sisters have possessed.

Everyone is a suspect which means that not only is any boy safe, neither is any girl as the town turns into a literal witch hunt. So the mystery aspect of it was kind of fun. There is also a mystery surrounding Penny’s absent father which gets revealed later on in the story.

I love a story with dark legends, curses, and revenge and in that regard, this book didn’t disappoint. The writing in this book was also quite beautiful and lyrical — almost magical — and the author is obviously quite adept at crafting beautiful prose.

I already mentioned disliking the insta-love trope, but even apart from that, the romance didn’t really work for me. In my opinion, this was the weakest aspect of the story. I dunno, I didn’t feel the intensity and chemistry between them, certainly not enough that they would risk their lives for each other after having only met a few days earlier.

I also have to admit that I had a hell of a time getting into this book. Usually, when I start a novel, I finish it in a couple of days. I kept picking this up and putting it back down for several days at a time and even considered DNFing it a time or two.

So there was an incredibly slow buildup to the story, at least for me. The characters perhaps lacked depth initially, they most of them ended up being nicely-developed later on.

But I did feel that there somewhat of a pacing problem in the story and it took a long time to get into it. But once the story picked up steam past the halfway point, my interest peaked as well, and I found myself utterly enjoying it.

Another niggle is that I figured out the twist pretty early on. I think maybe it could have been camouflaged a little better and not be so evident and easy to guess. But even though I figured it out, the story was still fun, and I enjoyed seeing it all play out.

And What’s with Those Festivals?

One aspect of the story that struck me as odd was the festivals and celebrations that the town would hold during Swan Season, complete with parties and various festivities. I mean every year during this time, several young men are murdered.

Were people so desensitized to these deaths that celebrating the Swan Sisters seemed okay to them? I can’t believe that people in a small town would act like this. You’d think they’d close off the town, shut down their shops and head for the hills during the month of June rather than engaging in merrymaking.

I liked the premise of this story, and The Wicked Deep ended up being a heavy tale about revenge, murder, betrayal, and forgiveness. In this way, it was a darker story, kind of spooky, and positively heartbreaking in places.

Once I got past the halfway point, I became more invested in what happened to the characters and the story enthralled me much more than it did initially.

But the plodding start and the predictability of the plot kind of dampened my enthusiasm for the book. I didn’t dislike it. On the contrary, I thought that the story was compelling and entertaining with interesting characters, and I am glad that I read it. I just didn’t love it quite as much as I hoped I would. And I ended up giving this 3 stars ⭐ ⭐ ⭐.

You can purchase The Wicked Deep here at Amazon or at The Book Depository.