You are here: Home / Fantasy/Urban Fantasy / Review of The Well of Ascension by Brandon Sanderson 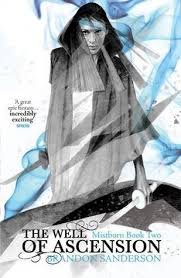 The Well of Ascension is the second book in the Mistborn series by Brandon Sanderson, so it’s difficult for me to say too much without giving away the first book, which was entitled “Mistborn: The Final Empire.” Let just say that The Well of Ascension takes place one year after the events of Mistborn: The Final Empire and where the kingdom of Luthadel is still in chaos, though the current rulers are slowly getting a handle on things.

Vin, one of the main characters in the first book and also one of the most powerful Mistborns in the kingdom, has really come into her own over the past year. But things go pretty quickly when three armies show up outside of the kingdom walls, each one intent of invading the kingdom and taking it for their own. If this happens, there would no doubt be a lot of bloodshed. So the question is: How can Vin and her companions stop this from happening…or can they?

The story gets even more interesting when Vin encounters another Mistborn like herself named Zane who is from one of the three armies outside of the gates.

Now it bears repeating that magic system in this world is called Allomancy and involves ingesting different types of pure metals and then “burning” them by will in order to temporarily gain enhanced abilities such as increased speed, super hearing and enhanced strength – even the ability to pretty much fly through the air. The majority of Allomancer’s are called Mistings and have the ability to burn only one metal and one metal only. But here is a rare and special type of Allomancer called a Mistborn who has the capacity to burn All the metals, so these are indeed truly powerful individuals, nearly unstoppable. Our Vin is one of these Mistborns.

So this strange new Mistborn slowly wins Vin over and in the process, causes her to question who she really is and whether her loyalties are misplaced. Of course, we have to wonder whether this Mistborn is for real or whether he’s only trying to get under her skin for strategic military purposes? Is his, after all, associated with one of the armies desiring to invade the kingdom.

Oh, it’s also worth mentioning that said Mistborn is quite insane.

You know, often, the second book in a trilogy leaves a lot to be desired, and my experience has shown that they’re often disappointing. Not so with The Well of Ascension. There was plenty of political intrigue and magic which made this an excellent sequel. This was a massive stonker of a book yet I tore through it quick quickly as there are plenty of twists and turns, heart-stopping action, intriguing new characters several surprising revelations.

I can’t wait to delve into the third and final book in this series in the coming days.

Purchase Well of Ascension at Amazon

Purchase Well of Ascension at The Book Depository