You are here: Home / Science Fiction / Review of The Twin Paradox by Charles Wachter 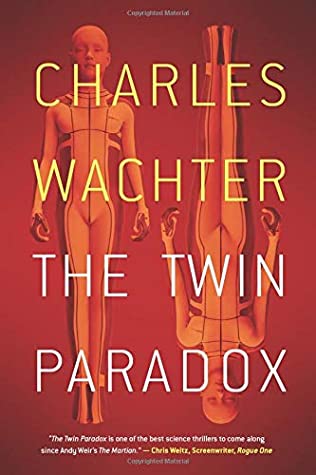 With ten years passing for every three minutes on a remote stretch of Texas coast, planes fall out of the sky, evolved species are on the hunt, and people die inside one of the most vicious ecosystems ever grown—all a result of the government’s efforts to slow down time.

A lot can happen in ten years. That’s the point. Governments are always racing for supremacy, for scientific breakthroughs, for technological advantages—and these things take time.

Until something goes wrong.

With the grounded yet massive world building of READY PLAYER ONE, thrilling scientific questions of JURASSIC PARK, and the time-bending teen drama of BEFORE I FALL, Wachter’s THE TWIN PARADOX is a brilliantly plotted tale that is both intimate and massive, relentless yet deliberate, and explores the themes of self-acceptance, self- confidence, and natural selection in a richly hued and unforgettable world. Ultimately the eternal question of Nature versus Nurture is boiled down into this fast-paced thriller told over the course of five days and culminates in one single question:

Do we get to choose who we are?

I love mind-bendy books, especially those with time travel, time manipulation, or multiple timelines, so I was excited when this book came to my attention. This Young Adult Techno-Thriller follows a group of high school kids in the Honors program who one day learn that they have been cloned from the DNA of history’s most brilliant minds such Isaac Newton, Leonardo de Vinci, Martin Luther King, and Einstein. The children are then sent to a secret facility in Texas – a place where time moves at different speeds (ten years pass for every three minutes spent inside of the dome). What follows is a whirlwind of shocking revelations that lead our protagonists into a world they could have only imagined. Because unbeknownst to them, they are pawns in a much larger game — a game involving governments who are trying to win a dangerous race. He who controls time, wins.

Also unbeknownst to the kids, they are not the only ones who have been cloned: a rival government has cloned some of the world’s deadliest villains to help stop the US Government’s progress — and that includes stopping the kids. Oh, and if that isn’t enough, the science has run amok.

This story was non-stop action, barely giving you enough time to catch your breath between scenes, and the author wastes no time in plunging the reader into the middle of this frenetically-paced wild roller coaster ride. What I initially thought was a sci-fi story quickly turned out to be much more. It’s a mind-bending, gripping techno-thriller that even dips its toes into the horror category (there are a couple of gory and cringeworthy scenes, but they’re minimal). This book has a bit of everything: time travel, time paradoxes, secret government experiments, cloning, dark holes/vortexes/wormholes, murder, espionage, secrets, manipulation, dark and dangerous schemes, biological warfare, betrayal, mutated creatures/monsters, cannibalism (this was the gory part I mentioned), evil villains and even a bit of magic.

On top of all that, the author gives us one hell of a continuous adventure that ultimately left me shocked, surprised, appalled, and thoroughly entertained. The story has so many pieces and layers that it unravels super fast, and what you think is the truth isn’t — what you think is happening isn’t. The atmosphere is rich with gritty drama and unnerving situations where the thrills and twists dominate — which is precisely what I look for in a thriller. Recommended!

Purchase The Twin Paradox on Amazon