You are here: Home / Suspense/Thriller / Review of The Turn of the Key by Ruth Ware 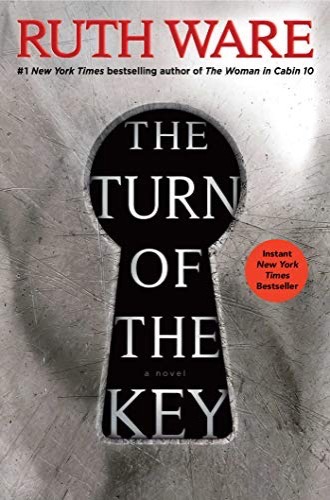 I’ve read other Ruth Ware books which I’ve enjoyed and was excited when I heard that she was coming out with a reimagining of Henry James’ novel “Turn of the Screw.” Well, I wasn’t really excited about the Turn of the Screw thing as I read it years ago when I was young and found it totally boring. I probably should give it a reread because I was pretty young when I read it.

Regardless, I ended up absolutely loving The Turn of the Key, a gothic-style thriller about a nannying position that has gone terribly, terribly wrong.

The story is told in epistolary format and follows a young potentially murderous nanny named Rowan Caine who is writing to an attorney named Mr. Wrexham from prison, in the hopes that he’ll represent her.

She is charged with murdering one of the children in her care. Through the letters, Rowan recounts her story about what really happened and all the events leading up to it. She ends her first letter by stating that she is innocent, meaning the true murderer is still on the loose.

As we learn, she spotted an ad for a live-in-nanny offering an unbelievably generous salary. When she arrives at Heatherbrae house for an interview, she finds a large, secluded gothic-style home situated in the remote Scottish countryside.

But she learns that though gothic on the outside, the house is, in fact, a “smart home” with everything from the lights to the locks to the appliance controlled via an app. I thought the blend of a Victorian-style house fully equipped with modern smart devices lent an extra bit of intrigue to the story, especially once we get the gothic horror element combined with the modern gadgets. It’s as if the house had a split personality.

So also learns that several recent nannies have left — four in the past year — because of their belief that the house is haunted, and as we learn, the house has quite a dark history. This is, of course, our first clue that something’s amiss with this too-good-to-be-true nanny position and of course, Rowan wonders what could have driven off so many nannies, especially those who left abruptly in the middle of the night. But the salary is too generous to pass up, and she’s determined to get the job. A job offer soon follows, and Rowan finds herself the nanny of four children ranging from 18 months to 14 years old.

When she arrives at the house, she’s more than surprised to discover that she’s to be immediately left alone with the children for a couple of weeks while the parents are out of town, meaning that she doesn’t even have a chance to become acclimated to her new environment. But she’s confident that she can handle it. That is until strange things begin to happen — things that very well could be supernatural in nature, such as malfunctioning smart devices, cold spots, creaking floors, missing belongings, and disappearing keys.

Oh – and there’s also a garden chock full of poisonous flowers and plants next to the house.

We also learn that Rowan isn’t completely innocent here and she arrives at the house with her own set of secrets. It’s hinted at early on that she may not be quite the person she presents herself to be and that her resume may have been embellished a bit, suggesting that she may have been unsuitable for the position. Of course, all her secrets come out at the end.

There was quite a desperate and claustrophobic feeling to this story as Rowan struggled to understand the smart home’s various controls, panels, switches, and apps, completely cut off from the rest of the world. I also found the idea of being under constant surveillance in every room of the house to be a tad unsettling as well as being in charge of mistrusting and openly hostile children.

There were so many delightful plot twists and red herrings in the story, most of which I didn’t see coming and I did not see the ending coming at all (speaking of the ending, make sure you read the Epilogue!). The story itself is fast-paced and picked up even more during the second half, especially once Rowan’s terror escalates.

It’s an unnerving and unsettling story, and it set my heart racing several times as I white-knuckled my way through the harrowing events. It was atmospheric and super-creepy, though it probably didn’t help that I read during the middle of the night while alone in a strange hotel room in a strange town.

But all in all, I found The Turn of the Key to be rich, complicated, creative, and clever — a spine-tingling, tension-packed gripper of a tale. I thought that Ware did a masterful job of layering on the twisty intrigue and mysteries until the reader is almost frantically turning the pages, impatient to find out what the hell is going on.

Purchase The Turn of the Key at The Book Depository

Purchase The Turn of the Key at Amazon