You are here: Home / Non-Fiction / Review of The Trauma Cleaner by Sarah Krasnostein 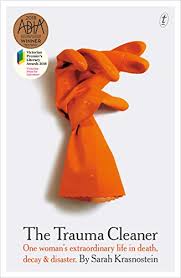 The Trauma Cleaner is part memoir, part biography that follows a transgender woman named Sandra Pankhurst, owner of a trauma cleaning business. What Sandra and her crew of cleaners do, is to enter the properties of suicide victims, murder victims, hoarders, and drug addicts and cleans them up. In this book, we follow along with the Sandra and the author as we enter a few of these sites and some of the descriptions thereof are pretty horrendous.

The book provides vivid descriptions of people, many of them hoarders, living in feces-invested homes with rats, roaches, flies, rotting food, mold-lined walls, rotted floors, and nearly unbearable stench, all of which the author witnessed firsthand as she accompanied Sandra and her crew to various scenes over a four year period. But in addition to cleaning up, Sandra enters into the lives of the occupants, gently leading them and guiding them to hopefully a better way of living, away from the hoarding and the filth. As she does so, we get to hear the stories of the some of the hoarders all of which I found quite fascinating.

But this isn’t just a look at the business of trauma cleaning, though that part is quite interesting. The Trauma Cleaner is also about Sandra’s personal life in which we learn that she began life as a boy named Peter and during her childhood, suffered horribly at the hands of an alcoholic and abusive father. It’s in these personal stories where we follow Sandra’s struggle with gender identity as she moves from suffering at the hands of abusive parents to her estrangement from her children as well as all of her friends after her transitioning process.

As Sandra’s personal history unfolds for us, we witness harrowing events such as her life as a child during which she was beaten, starved, ignored and forced to live in a shack outside of her home; the time she spent as a prostitute; a shocking event where she was beaten, raped and nearly murdered by a client; and the night that the person with whom she was in love with was brutally murdered right in front of her. She has also had to endure much transphobic abuse and hostility surrounding her transition.

Sandra’s story is truly fascinating as she has gone through more ups and downs than most of us can even begin to imagine. In fact, some of the events of our life seem so far out there, that part of the story read more like a fiction novel than a biography.

Though Sandra had gone through more than her fair share of hardship, her story is also an inspiring one. It’s a story of a strong woman who overcame one difficult situation after another by sheer force of will and through it all, held on to her dignity. So in this way, Sandra Pankhurst is quite an admirable person, and I loved the way she reinvented herself over and over again. The author painted a mesmerizing portrait of a woman’s bizarre life and did so in a way that allowed me, as a reader, to empathize and connect with Sandra.

I also enjoyed how multi-faceted and complex of a person Sandra is. The blurb for the book describes her as a husband, father, drag queen, sex worker, and wife. We cannot forget that she is additionally a successful entrepreneur and a trauma cleaner so, in this way, she is indeed a woman of many guises.

I found both Sandra’s personal story and the brief peek into her life as a trauma cleaner to be utterly fascinating, and it held me captive until the end of the book. I thought the author did an excellent job of presenting and balancing Sandra’s business with her clients with her personal history, and I think that Sandra may be the most compelling person that I’ve ever read about. By shifting the narrative back and forth between Sandra’s trauma cleaning business and her history, we begin to get a glimpse of those events which brought her to the current place in her life.

Additionally fascinating was the peek into the lives of the hoarders. What I found surprising, was how hoarding does not discriminate on the basis of income or intelligence but rather, hoarders can be anyone from a drug addict to someone holding a Ph.D.

I enjoyed reading the narratives of the hoarders and learning how they ended up in their current situation. Reading some of these accounts certainly has caused me to think about ways of making my own life more uncluttered.

Initially, I was a bit confused by the book. The name of the book is “The Trauma Cleaner” so I went into this book assuming that the focus was going to be on the trauma cleaning and the intricacies involved with it. In actuality, the book touched very little on the “trauma” aspect of Sandra’s business and mostly focused on her past life. The few trauma scenes that we did experience were told through the observations of the author. I would have preferred more client stories and more trauma site anecdotes. Thus, if you’re expecting to learn about the trauma cleaning business and all that’s involved with it, this isn’t the book you’re looking for.

Additionally, we are told that Sandra is an unreliable source as there are huge gaps in her memory mostly likely due to years of drugs, hormones, alcohol, and exposure to chemical cleaning supplies necessary for her business. So I couldn’t help but wonder how many of the events in the book actually happened and how much was just speculation on the part of the author. In this way, I’m a bit dubious about many of the events as presented in the book and couldn’t help but wonder to what extent they were embellished. Though to be fair, I’m typically not a fan of unreliable narrators.

All in all, The Trauma Cleaner was an engaging, mesmerizing and poignant look at the life of a fascinating person. The book was humorous in some places, heart-breaking in others but through it all, the author painted for us a portrait of a strong, admirable and resilient woman who chose to live life on her own terms.

Though I was a bit disappointed initially after having realized that trauma cleaning was not the focus book, I ended up truly enjoying this unique and engaging biography about human survival, loneliness, pain, loss and ultimately, triumph. It is an emotional and sometimes shocking story about an extraordinary life, and I’m so glad that I read this creative book. Recommended!

Purchase The Trauma Cleaner at Amazon

Purchase The Trauma Cleaner at The Book Depository