You are here: Home / YA Fantasy/Urban Fantasy / Review of The Temperature of Me and You by Brian Zepka 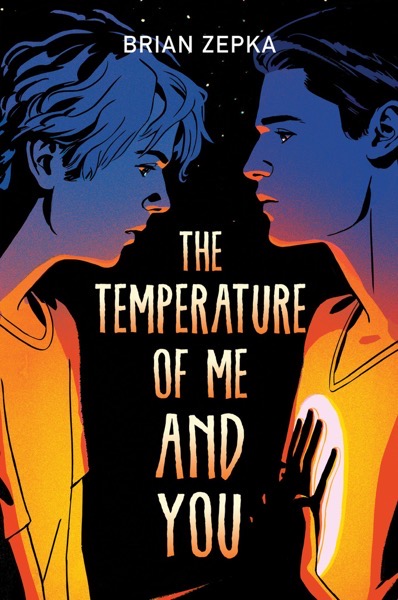 Sixteen-year-old Dylan Highmark thought his winter was going to be full of boring shifts at the Dairy Queen, until he finds himself in love with a boy who’s literally too hot to handle.

Dylan has always wanted a boyfriend, but the suburbs surrounding Philadelphia do not have a lot in the way of options. Then, in walks Jordan, a completely normal (and undeniably cute) boy who also happens to run at a cool 110 degrees Fahrenheit. When the boys start spending time together, Dylan begins feeling all kinds of ways, and when he spikes a fever for two weeks and is suddenly coughing flames, he thinks he might be suffering from something more than just a crush. Jordan forces Dylan to keep his symptoms a secret. But as the pressure mounts and Dylan becomes distant with his closest friends and family, he pushes Jordan for answers. Jordan’s revelations of why he’s like this, where he came from, and who’s after him leaves Dylan realizing how much first love is truly out of this world. And if Earth supports life that breathes oxygen, then love can only keep Jordan and Dylan together for so long.

I love queer superhero books, so I was super excited when this book crossed my path. It follows a lonely and somewhat anxious sixteen-year-old gay kid named Dylan Highmark who is awestruck when a cute but mysterious boy named Jordan comes into the Dairy Queen where Dylan works. Jordan is different from most boys in that he is very hot — hot as in he runs at 110 degrees Fahrenheit and can shoot fire from his hands.

As Dylan and Jordan get to know each other, we learn that Jordan’s power is the result of an accident that killed his parents, and now, he’s on the run from an evil corporation out to kidnap him so their scientists can perform experiments on him. But when a new complication arises, they have to fight not only to find each other again but also to stay alive.

This fast-paced story drew me in almost immediately, and I had fun getting to know Jordan and Dylan. They were so cute together, with a phenomenal romantic chemistry between them. I appreciated the witty and fun banter between them and the character growth they both experienced as the events unfolded.

Additionally, the book touched on many important themes such as romance, first love, secrets, friendship, enemies vs. allies, and family, all of which were well done by the author. The book especially focused on the various friendships in the book – old friends, new friendships, and unlikely friendships, all the while examining the sometimes challenging relationship dynamics therein. That being said, this is a beautiful story about love and friendship and how they can spring up in the most unlikely of places. Thus, alongside this engaging story, the author also gives us an incredible cast of characters.

The book contained a compelling and engaging mystery that kept me frantically reading until the end. I loved how the author ratcheted up the tension as the suspense and intrigue continued to build and build until the final climax. Brian Zepka really nails the teenage voice in this story. He seems to really understand the teenage soul—the longing, the self-awareness, the anxiety, the awkwardness, the challenges, the confusion. I would definitely love to see more future books with Dylan and Jordan in them.

Purchase The Temperature of Me and You from Amazon