You are here: Home / Suspense/Thriller / Review of The Sinful Lives of Trophy Wives by Kristin Miller 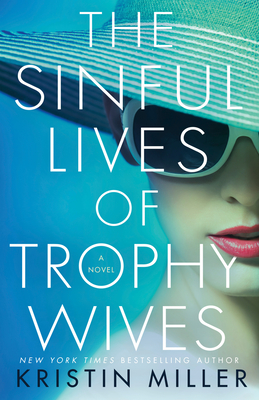 Meet the trophy wives of Presidio Terrace, San Francisco’s most exclusive–and most deadly–neighborhood in this shrewd, darkly compelling novel from the New York Times bestselling author of In Her Shadow.

Mystery writer Brooke Davies is the new wife on the block. Her tech-billionaire husband, Jack, twenty-two years her senior, whisked her to the Bay Area via private jet and purchased a modest mansion on the same day. He demands perfection, and before now, Brooke has had no problem playing the role of a doting housewife. But as she befriends other wives on the street and spends considerable time away from Jack, he worries if he doesn’t control Brooke’s every move, she will reveal the truth behind their “perfect” marriage.

Erin King, famed news anchor and chair of the community board, is no stranger to maintaining an image–though being married to a plastic surgeon helps. But the skyrocketing success of her career has worn her love life thin, and her professional ambitions have pushed Mason away. Quitting her job is a Hail Mary attempt at keeping him interested, to steer him away from finding a young trophy wife. But is it enough, and is Mason truly the man she thought he was?

Georgia St. Claire allegedly cashed in on the deaths of her first two husbands, earning her the nickname “Black Widow”–and the stares and whispers of her curious neighbors. Rumored to have murdered both men for their fortunes, she claims to have found true love in her third marriage, yet her mysterious, captivating allure keeps everyone guessing. Then a tragic accident forces the residents of Presidio Terrace to ask: Has Georgia struck again? And what is she really capable of doing to protect her secrets?

The story takes a look at what goes on behind the gates of Presidio Terrace, an upscale San Francisco neighborhood for the uber-rich. This reads kind of like a fun 80s melodrama (it made me think of Alexis from Dynasty). We follow three main characters who are married to millionaires:

Georgia St. Claire is known as “The Black Widow” because two of her husbands died under somewhat mysterious circumstances. But she’s engaged once again, this time to a man named Robert whom she claims she loves with all her heart — and the wedding is to take place in a few days. So, will Robert be victim number three?

Erin King is a well-known and somewhat neurotic television news anchor who is quite a prima donna. She’s married to a plastic surgeon who is a major jerk. Regardless, she walks out on her job, deciding that she would simply be a trophy wife to her husband, Mason. She’s also overly obsessed with her appearance, even more so when the attractive Brooke moves into the neighborhood.

Brook Davis is the newcomer to the neighborhood. She’s married to a wealthy man twenty years her senior who appears to be more than a bit controlling. She is a murder mystery writer who is looking for new subject matter for her next novel — and just may have found it in Presidio Terrace.

The three women become fast friends, and we soon learn that there’s a lot more to them than merely being “trophy wives.” Each of them has dark secrets that come to light as the novel progresses, and the author wastes no time plunging the reader into the middle of a scintillating mystery.

The story is told alternating first-person POV through the eyes of each of our three heroines, we witness the shocking events leading up to and following Georgia’s wedding day. The short chapters added to the fast pacing of the story, resulting in an addictive, compelling, and suspenseful tale. There are deep, dark, dangerous secrets to be uncovered and harsh truths for all three ladies to confront.

Though this was a campy story rife with high drama, there’s also an ominous undercurrent of foreboding that runs beneath this creepy, atmospheric tale. That’s what makes this a fun and compulsive read, as the situations worsen and the twists continue. Yes, the characters and the situations are way over-the-top, and that was the fun of this book. I was also blindsided by the ending — a twist that I didn’t see coming.

A wicked, dark, and juicy frenetically paced thriller that hooked me from the very first page. Definitely recommended for those that love their thrillers suffused with a bit of high drama.

A huge thank you to Netgalley and Random House Publishing/Ballantine Books for providing a review copy of this book.