You are here: Home / Suspense/Thriller / Review of The Silent Patient by Alex Michaelides 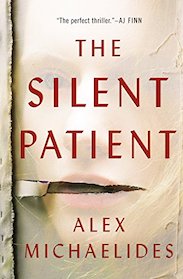 The Silent Patient is a dark psychological suspense that follows a famous painter named Alicia Berenson who is happily married to her husband, Gabriel. But in the opening scene of the book, we learn that Alicia’s husband has been murdered. Alicia is standing covered in blood next to the body of her dead husband, who is still tied to a chair. He had been shot in the face five times, and as it turns out, Alicia’s fingerprints were on the gun that was lying on the floor. The obvious conclusion is that Alicia murdered him.

Did She or Didn’t She?

But did she? Well, the reader had to come up with his or her own conclusion because after the murder, Alicia never spoke another word. Nothing. She refused to talk and gave no explanation or justification for what she did — no defense, no denial, no commentary. Totally silent. Alicia was taken to a psychiatric facility called The Grove, and we wonder whether she will ever speak again to let the world know what really went down that night.

Theo to the Rescue

Fast forward six years where we then, we meet Theo Faber, a criminal psychotherapist who has waited a long time for the opportunity to work with Alicia. The novel is actually narrated by Theo who tells us Alicia’s story. This is always a trope that I enjoy; that is, when the story is told from the perspective of a psychiatrist. This could be because my undergrad degree is in Psychology, but regardless, I find the exploration and analysis of a patient’s psyche absolutely riveting and it certainly was in this case.

He is determined to help her find her voice and solve of the mystery of why she shot her husband, with only one main clue at his disposal: an unsettling self-portrait that she painted after the murder and which she titled ‘Alcestis,’ which is the name of a Greek Tragedy.

Though Theo’s conversations with others, we learn more about Alicia, especially how others viewed her, their assumptions about her and their theories about what led up to the murder. As he dug deeper into her past, I began to create certain theories and assumptions of my own. But I’m happy to say that I did not figure it out. Because I hate that. I will also say that the author doesn’t try to lead the reader down the wrong path by peppering the story with erroneous clues. Truth be told, I had no idea how it was all going to play out until the final shocking pages.

A Dark and Disturbing Path

So as Theo begins interviewing others, diving deeper into Alicia’s psyche through therapy and studying entries in Alicia’s diary – the diary she was keeping before her husband’s murder — he ends up going down quite a dark and twisty path, especially once he begins to get a clearer image of who she was, her history and of the events that preceded the murder. Naturally, not all is as it seems. But all through the story, I had one nagging questions: Why has Alicia remained silent. What is shock or fear or guilt? Or something else entirely?

Given that the story is told from Theo’s point of view, we also get a peek into his life and his thoughts, and eventually learn why he is so determined to learn the truth about what happened that night.

But the highlight of this story is the completely insane and unexpected twist that comes at the end. It was nothing short of amazing, and I did not see it coming at all. It snuck up on me without warning. I was shocked, I tell you, shocked. This ending is definitely a favorite.

All in all, The Silent Patient was a meticulously well-crafted, captivating and clever psychological thriller that kept my eyes glued to the page with a plethora of twists, turns, and surprises. I have to say that I found Alicia to be one of the MOST compelling, enigmatic and complex characters I have ever read about. This is a well-written, engaging, and suspenseful novel that drew me right in from the beginning and then totally blew me away at the end. It was a complete whirlwind of a story — dark and intense — and I loved it.

PURCHASE THE SILENT PATIENT FROM AMAZON

PURCHASE THE SILENT PATIENT FROM THE BOOK DEPOSITORY