You are here: Home / Contemporary Fiction/Classics / Review of The Secret Life of Albert Entwistle 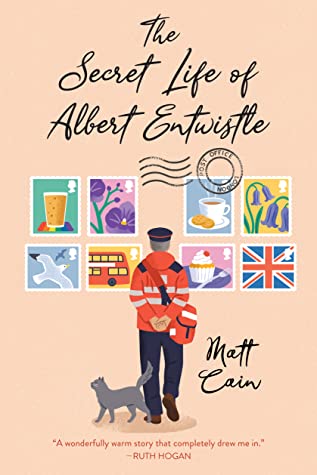 Albert Entwistle is a private man with a quiet, simple life. He lives alone with his cat Gracie. And he’s a postman. At least he was a postman until, three months before his sixty-fifth birthday, he receives a letter from the Royal Mail thanking him for decades of service and stating he is being forced into retirement.

At once, Albert’s sole connection with his world unravels. Every day as a mail carrier, he would make his way through the streets of his small English town, delivering letters and parcels and returning greetings with a quick wave and a “how do?” Without the work that fills his days, what will be the point? He has no friends, family, or hobbies—just a past he never speaks of, and a lost love that fills him with regret.

And so, rather than continue his lonely existence, Albert forms a brave plan to start truly living. It’s finally time to be honest about who he is. To seek the happiness he’s always denied himself. And to find the courage to look for George, the man that, many years ago, he loved and lost—but has never forgotten. As he does, something extraordinary happens. Albert finds unlikely allies, new friends, and proves it’s never too late to live, to hope, and to love

This delightful and heartwarming story follows Albert, a lonely 64-year-old postman who makes some startling discoveries about himself. Though this is in part a story about a man coming out of the closet after over forty years and searching for his lost love, it’s also about coming out of your shell — about taking the brave step in opening yourself up to your neighbors and coworkers. This was a very relatable book for me as I am close in age to Albert and know only too well the hate and homophobia gay boys had to face in the 60s & 70s. It was also quite accurate from my recollection.

I enjoyed how the story was told via flashbacks to Albert’s youth, and we see the events that led him to his current situation: his hateful homophobic father, his apathetic mother, the oppressive laws of the time, and, of course, George — the first and only boy Albert fell in love with. The story unfolds in bits and pieces, allowing us to slowly understand where Albert is coming from as all is finally revealed.

I loved how Albert began to shine once he attempted to get the know the people in his life and start to embrace his life in the process. I especially enjoyed his friendship with Nicole, a single mom going through some tough times. The author did an excellent job of juxtaposing Albert’s newfound happiness with the darkness and sadness of his past. It was s delight to see Albert bloom once he ceases feeling ashamed of who he is and embraces and accepts himself instead. His transformation warmed my heart as well as sent a tear or two to my eyes.

All in all, I love this impactful story. It was heartfelt, amusing at times, traumatic at others, but always compelling and touching. Albert’s character development and character arc were phenomenal. And though the story does tackle some tough themes, it ultimately will bring a smile to your face. At least it did mine.