You are here: Home / Suspense/Thriller / Review of The Second Sleep by Robert Harris 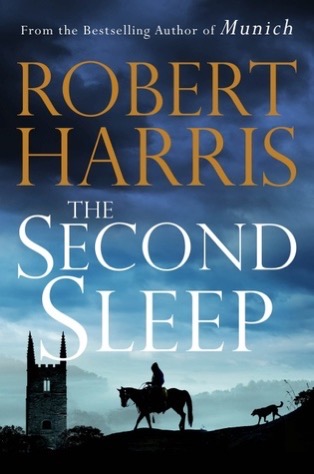 The story opens in 1468 and follows a young priest named Christopher Fairfax who arrives at the local parish in an out of the way Essex village. He’s there to officiate at the funeral of the village priest, Father Lacy, who had died in a fall from a local landmark known as The Devils Chair.

As he goes through the priest’s belongings, he learns that the man was a collector of artifacts that he discovered in local digs, including fragments of glass, old coins, and human bones. He then discovers ancient books in the deceased man’s collection — especially records of the suppressed Society of Antiquarians books that are expressly forbidden by the church and would result in severe punishment — even execution — if discovered. In fact, all previous copies of this book have been burned by the church.

So Father Fairfax is quite shocked to discover that the old Father Lacy, his mentor, and predecessor, was a heretic. Gasp!

I can say that this point that the society here in this story completely revolves around the Church. I can even go so far as to say that in this story, the Church and State are inextricably linked. So even though he knows it’s forbidden, Fairfax begins reading some of the priest’s old books and ends up drawn into a mystery that causes him to question everything he knows about his world, his church and his faith.

So this was one of those books that ended up being not at all what I thought it was. What’s different about this book, is that the twist comes early — right at the end of Chapter 1 or Chapter 2. I was reading along and slowly had the impression that something wasn’t quite right with what I was reading….that the passages contained elements that didn’t make sense in the story. I was confused. Then all of a sudden, a light bulb went off and I was like, “Oh my God! Now I get it!”

The name of this book, “The Second Sleep,” is a reference to the antiquated practice of people waking up for a couple of hours during the night and then going back for their “second sleep.” Kind of like second breakfast, I guess. But once the big reveal happens and you understand what’s really going on, then the title takes on a secondary meaning.

Because of the early twist, I can actually say very little about the story without giving it away so talking about this is kind of tricky, but I will say that my assumptions and expectations were completely challenged here. I was fortunate as I went into this 100% blind, thinking that it was a basic historical fiction novel about a priest. I couldn’t have been more wrong.

What we have here then, is a highly detailed description of Medieval England that follows a priest who, like his predecessor, becomes obsessed with discovering the truth about the past, a truth that has been carefully hidden away. Along the way, Fairfax also discovers that there are irregularities surrounding Father Lacy’s death.

Our protagonist goes on quite a fascinating journey of self-discovery here and he takes on his predecessor’s search, even though knowing that his research could lead to his ruin and condemnation. There’s also the puzzle here of attempting to uncover why the current world and current society are the way they are. This is when the pace of the story really picks up we journey along with Father Fairfax and he slowly unravels a centuries-old mystery. There is a race against time as he, along with a couple of others, attempt to unearth the secrets that Father Lacy had begun investigating, before the authorities catch up to them.

I thought this was such an imaginative book with numerous twists and turns along the way. The writing was also quite atmospheric and I could vividly picture the buildings, landscape, and people of Medieval England as the author described him, providing me with a strong sense of place.

I will say that the truth behind the facade in the story — the actual truth — is utterly chilling and leads the reader (or at least it did me) into some very uncomfortable and frightening territory. I thought the story was alarming and definitely leads to some serious contemplation about our own society and the dangers of where it might lead us.

In truth, this is a very rich story and deals with several loaded issues such as history, secrets, zealotry, power of the church, controlling people, the fragility of society, corruption and hidden knowledge. And there are plenty of others that I can’t talk about lest I give anything away.

My only niggle with the book was the ending, which was so open-ended that it left me with a feeling of dissatisfaction. If it wasn’t for that, which I found a tad abrupt, this would have been a five star read for me. But still, this was a mesmerizing thought-provoking novel with a meticulously woven plot, compelling — and dodgy — characters and a thrilling, if not creepy concept with plenty of suspense and a shocking early-on reveal.

I thought that the story flowed nicely and it held my interest throughout, especially once the pace picked up after the big literary twist and a sense of urgency was established. I enjoyed the development and progress of the plot and it felt to me like I was digging up some long-lost treasure that no doubt will haunt me for a long time. To say this book is entertaining is doing it a disservice, as it’s intriguing and beguiling — tense and unsettling — on so many levels.

Now if this sounds like something you may enjoy, I would caution you to try and not read any reviews of it because people don’t seem to have any qualms about including spoilers. Shame! In my opinion, this original story is best enjoyed when knowing as little as possible about it.

Robert Harris is a new author for me and I definitely hope to read more of his work.

Purchase The Second Sleep on Amazon

Purchase The Second Sleep on The Book Depository