You are here: Home / Fantasy/Urban Fantasy / Review of The Reincarnationist Papers by D. Eric Maikranz 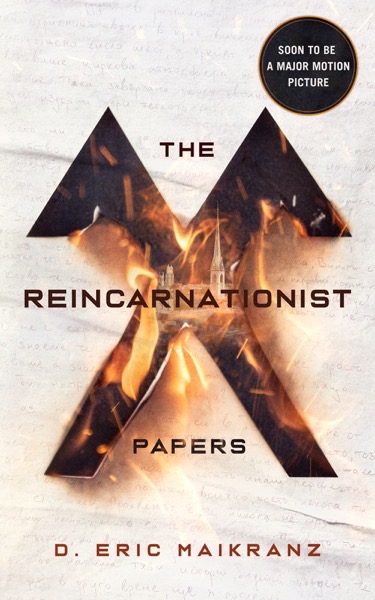 ”For fans of The Matrix and Memento, a twisty, exciting adventure!” –Diana Gabaldon, #1 New York Times bestselling author of the Outlander series

The basis for the major motion picture Infinite

Discovered as three notebooks in an antique store in Rome at the turn of the millennium, The Reincarnationist Papers offers a tantalizing glimpse into the Cognomina, a secret society of people who possess total recall of their past lives.

Evan
Michaels struggles with being different, with having the complete
memories of two other people who lived sequentially before him. He
fights loneliness and believes he is unique until he meets Poppy. She
recognizes his struggle because she is like him, except that she is much
older, remembering seven consecutive lives. But there is something else
she must share with Evan — she is a member of the secretive Cognomina.
They are, in effect, immortals — compiling experiences and skills over
lifetimes into near superhuman abilities that they have used to drive
history over centuries.

Poppy invites Evan into the Cognomina, but he must face their tests before entering this mysterious society as their equal.

I love twisty stories about past lives and secret organizations, so the synopsis of The Reincarnationist Papers grabbed my attention right away. The story follows a fellow named Evan Michaels, a professional arsonist-for-hire. Evan, however, is different than most people in that he is living with three sets of memories inside of his head: his current life and the complete memories of two other people. He suspects that he’s crazy and lives his life the best he can.

But then he meets Poppy, who recognizes Evan for what he really is: someone who has complete recall of their past lives. As it turns out, Poppy has lived seven consecutive lives, so in this way, she’s much older than Evan. She subsequently invites him to apply to a secret society called the Cognomina, a group for people who are like the both of them: immortals who recall all of their past lives. But first, Evan has to go through a series of tests to prove that he is, in fact, one of them, and in so doing, we go more in-depth into his past lives as well as the others in the society via the narrative and flashbacks. I found the drama and the interwoven secrets between the Cognomina members throughout their many lives to be compelling and a lot of fun.

What was entertaining about this book is that it felt like it was a non-fiction story — a sort of documentary in which the author comes across these “Reincarnationist Papers” in an antique bookstore in Rome and is now sharing those notebooks in book format for all of us to read and ponder. So in this way, I found the world-building to be phenomenal. I thought this aspect was such a unique and refreshing take on the past life genre and really added to the story’s overall enjoyment. It was fascinating how all of the characters no longer feared death at all because they knew they’d be coming right back. This was quite an interesting philosophy on the overall theme of life after death.

We’re also treated to a delightful set of eccentric and hedonistic personalities in the Cognomina, all of which added an essential element to the story. Each character was captivating and described in such detail that I could easily picture having a conversation with any one of them, resulting in a vivid and atmospheric story. I especially enjoyed the character arc of Evan as he experienced considerable growth throughout the book.

We also learn the origin of the Reincarnationist Papers — who wrote them and why. But that’s all I’ll say on that lest I move into spoiler territory. But I can say that The Reincarnationist Papers is a delightful and enthralling read that makes you ponder who you are, where you come from, and what your responsibilities are to both. Told in alternating perspectives with crisp writing, I found this to be quite a thought-provoking book that I thoroughly enjoyed.

A huge thank you to TK and Blackstone Publishing for providing a review copy of this book.

Purchase The Reincarnationist Papers on Amazon