You are here: Home / Book Reviews - All / Review of The President is Missing by Bill Clinton and James Patterson 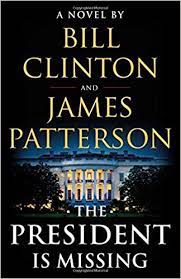 This is a book that I normally wouldn’t pick up as the political thriller isn’t usually a genre that I read. But when I learned that this was to be a collaboration between James Patterson and President Clinton, I figured I’d give it a go, especially since I’ve heard so many great things about it.

First off, I listened to this on Audible, and it was amazing! Dennis Quaid performed the voice of the president, and many other actors joined in to create a truly impressive and immersive collaboration. This was more like a radio play than the reading of a novel. I’m so glad I went with the Audible version.

A threat to the country

So The President is Missing revolves around the President of the United States, James Duncan, who is under attack by the Speaker of the House, Lester Rhodes. Rhodes and the House Committee are pushing for impeachment hearings because it has come to the country’s attention that President Duncan has had contact with a terrorist organization called the Sons of Jihad, and he refuses to divulge the contents of that communication.

As the story unfolds, we learn that it has come to the President’s attention that the Sons of Jihad is planning on releasing a devastating computer virus that will infect every computer, server, network and electronic device in America and in so doing, will ultimately destroy the infrastructure of the United States, most likely resulting in the deaths of a lot of people — possibly millions.

In order to thwart the terrorist organization’s effort, the President must go underground for a brief time during which nobody is aware of his whereabouts. Hence the title, “The President is Missing.”

To add to the intrigue, we follow a professional hired assassin — a woman code-named Bach — who seems to be moving closer to the president through we’re not entirely sure whether he is her target.

But there’s a traitor in the house

To make the president’s task even more difficult, he figures out early on that one of his six closest team members — people in charge of departments that are essential to his investigation — is a traitor. This person learned early on about the deadly virus but opted to tell no one.

So in addition to figuring out how to stop the threat, the President has to go it alone because he doesn’t know which of his trusted advisors is the Benedict Arnold so he can’t trust any of them. In doing so, he cuts himself off from access to vital and indispensable resources that are normally available to him

A race against the clock

What follows is a mad race against the clock to figure out how to stop one of the most terrifying and debilitating cyber attacks the world has ever known, with the fate of the entire country at stake. From the moment the President goes off the grid and missing from the White House, the tension in the story is unrelenting. To add to the stress, the president also suffers from a rare, life-threatening blood disorder requiring medical care which could result in his death at any moment if left untreated.

This was a fast-paced, tense and unsettling political thriller that kept me guessing until the surprising denouement at the end. The intrigue and excitement grow steadily throughout the story along with a perfectly balanced narrative and a complex, compelling plot. Short chapters push the dramatic story along quickly, and by the end, I couldn’t put it down . What made this story especially fun for me was never knowing what was real or who to trust.

Though horrifying at times

Though The President is Missing is exciting and gripping, it is also horrifying. The whole premise of the cyber attack as it was presented in this book struck terror in my heart. The story shows in chilling detail the fallout of such a cyber attack and all I can say is that I hope it never comes to pass. Otherwise, we’re all screwed!

Regardless of your political leanings, I could really see President Clinton’s influence in the story, especially when dealing with the cabinet members, describing the intricate workings of the high level department in the White House, dealing with high ranking officials, the President’s relationship with the secret service agents and those scenes in which President Duncan communicated with other world leaders. These details as presented by someone who actually has served as president added a richness and believability to the story.

All in all, a stunning page-turner of a story involving murder, cyberterrorism, Russia, the Middle East, hackers, traitors, treason, assassins, espionage, the media, and a life-threatening illness. I loved this story and was sad to see it end.

Now there is a scene near the end of the book where President Duncan makes a major speech about the current state of the country and of the world, which felt that it could have come directly from the mouth of President Bill Clinton. Now depending on your politics, you may like or dislike this speech. I personally loved it, and it even sent a tear to my eye. This seemed to be the only real apparent partisan element in the story, however, and speech aside, I feel that this book is mostly non-partisan and is a story for anyone, regardless of political party affiliation — at least IMHO. Recommended!

Purchase The President is Missing at Amazon

Purchase The President is Missing at The Book Depository