You are here: Home / Contemporary Fiction/Classics / Review of The Night Tiger by Yangsze Choo 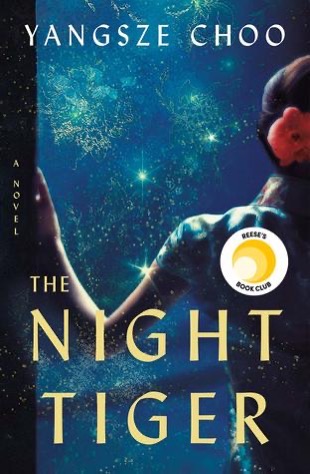 The Night Tiger takes place in Malaya in the town of Ipoh during the 1930s and opens to a scene in which Dr. MacFarlane, the employer of an orphaned Chinese houseboy named Ren, is about to die. Before passing, the doctor makes one final request of the boy: that he find his missing severed finger lost years ago and reunite it with his body. Now there’s a strong sense of urgency here as Ren only has 49 days to complete the task; if he fails, his master’s spirit will roam the earth forever, unable to rest. Ren then arrives at the home of less-than-respectable surgeon William Acton with a letter of recommendation from MacFarlane, who told Ren before his death that he believed Acton will still have the finger that was amputated during an exploration years before but he needs to find the finger on his own and must not mention it to Acton.

So then we meet a young woman named Ji Lin who, though she has dreams of becoming a nurse, works instead as an apprentice dressmaker to adhere to her oppressive and abusive stepfather’s demands. Because of her mother’s gambling debts, however, Ji Lin also moonlights as a dancehall girl to help pay them off.

One evening, Ji Lin dances with a man and accidentally takes a small container from his pocket, only to discover later on that the object is a test tube with a shriveled severed finger inside. So we can only assume that this is the finger Ren must find and that now her fate will be linked with Ren’s. Desperate to get rid of it, she enlists the help of her step-brother Shin to help get it to its rightful owner.

There is also the fact that a tiger is prowling the town which is blamed on the several bizarre deaths that occurred in the village recently.

There are some who believe that the creature is, in fact, a were-tiger, a creature of Chinese superstition that has the ability to shapeshift into human form. It’s kind of the opposite of a werewolf because here we have an animal that shifts into a human rather than the other way around. At some point in the story, all three of their lives intertwine – the boy, the girl, and the tiger, creating danger for our two main characters. It’s also interesting how Ren and Ji Lin’s lives become linked through dreams and the events in the story.

This was such an atmospheric book with beautiful imagery, and the author has a knack for sucking you right into the story. There were several other interesting motifs as well, such as the repeated theme of the five Confucian virtues as well as the theme of actual twins.

I thought this was a lovely adventurous Asian-inspired fantasy steeped with mythology and it was a blast to read, with its blend of historical fiction, magical realism, mystery, possible murder and even a touch of romance, though the romance was a bit strange, to be sure.

Purchase the Night Tiger on Amazon

Purchase The Night Tiger on The Book Depository