You are here: Home / Suspense/Thriller / Review of The Maidens by Alex Michaelides 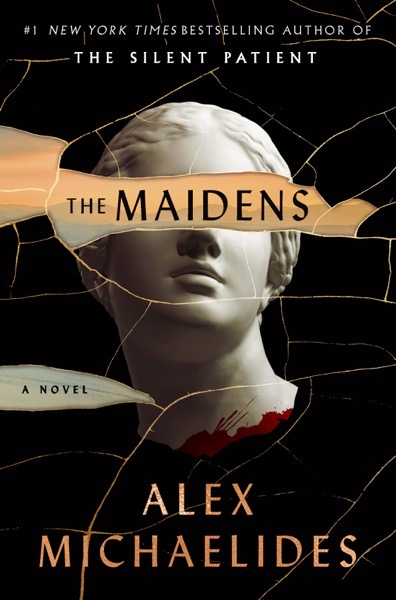 Alex Michaelides is the same author who wrote “The Silent Patient,” a book that I really loved and gushed about on this channel. I did a video review of it a while back, so I’ll put a link to that video up above. That being said, I was super excited when I learned that Michaelides had come out with a new thriller.

The Maidens is a dark academia “whodunnit,” and the story follows a troubled London-based group psychotherapist named Mariana Andros who is grieving the death of her husband Sebastian, who passed away a year prior. She also appears to have difficulties setting boundaries between her and her patients, especially one of them who is harassing her and has frighteningly crossed into stalker territory.

One night, she gets a panicked phone call from her niece Zoe who’s attending school at Cambridge. A body has been discovered near campus, and Zoe believes that it’s her friend Tara. Mariana drops what she’s doing and rushes to her niece’s aid. Sure enough, the body turns out to be Zoe’s friend Tara who was brutally murdered in the MO style of a Greek tragedy.

We learn that Tara was a member of a secret campus society called “The Maidens,” led by the handsome, charismatic Greek Mythology professor, Edward Fosca. Described by others as “dazzling,” Fosca is so well-liked by the students that they erupt into thunderous applause at the end of each of his lectures. As for The Maidens, the group appears to be a cult that includes only young girls (his “favorite” students), all who wear long white dresses and come across as zealous and a tad creepy. We also learn that Tara had confided in Zoe on the night of her murder that Professor Fosca had threatened to kill her.

Mariana is convinced that Fosca is the murderer and when a second body shows up — also mirroring a Greek tragedy — her obsession with the man grows even more potent. There’s definitely something sinister going on at Cambridge, and she is sure that it involves the professor. He has an alibi, however. He states that he was with The Maidens during both of the murders though Mariana is still unconvinced. She’s pretty confident the loyal maidens would no doubt lie for their enthralling leader. The police don’t buy Mariana’s theories, however, and have suggested that she butt out. Determined that it’s now up to her alone to prove Fosca’s guilt, she soldiers on.

Through her investigations, she discovers that both of the victims received a postcard on which was written a quote from a Greek tragedy in Ancient Greek. When Mariana receives her own postcard, she can only assume that she’s next on the killer’s list. And even though he appears to be untouchable, she is determined to bring Fosca to justice, no matter how dangerous things might turn out to be for her — and they do, indeed, get very, very dangerous.

By the way, this novel takes place in the same world as The Silent Patient, and there were even cameos by and mentions of some of the characters from that book, so I did appreciate the Easter eggs and the tie-in. I also loved all the references and nods to Greek mythology. Readers who enjoy Greek history will undoubtedly enjoy that aspect of the book, especially the clever way the author manages to weave in mythology with the murders.

Though the initial build-up takes place slowly, this ends up being quite a fast-paced story, with the short chapters adding to the overall feeling of desperation and unease. Think you have the plot figured out? Think again. A couple of times, I was certain I’d figured out “whodunnit,” but I was completely blindsided by an ending that I did not see coming. This was one of those stories where you are unsure of who you can trust, with suspense and suspicion accumulating relentlessly. Every character ends up looking suspicious and untrustworthy! With exceptionally clever red herrings and misdirects, the author obscures the truth about what is really happening — and why — until the novel’s twist-filled, jaw-dropping conclusion.

All in all, The Maidens is a delightfully twisty and unsettling psychological thriller fueled by obsession that I really enjoyed reading. I can’t wait to see what this author comes up with next.

A huge thank you to the lovely publicist at Celadon books, who provided me with a review copy of this book.

Purchase The Maidens from The Book Depository