You are here: Home / Fantasy/Urban Fantasy / Review of The Magic Between by Stephanie Hoyt 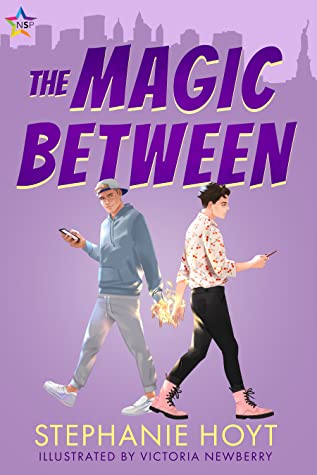 In a world where everyone has magic coursing through them, legend says magic itself craves a mate. Legend says those with opposite magics have the greatest chance of forming the unbreakable Bond it desires.

A.B. Cerise is an obsessive compulsive pop star with the ability to turn invisible. He’s an out bisexual with absolutely no belief in Bonds. He has a love-bruised heart, thinks dating in the spotlight is a hassle at best and a nightmare at worst, and has no intention of going through it all over again.

Matthew Hellman-Levoie is the NHL’s number one goalie prospect, the youngest in a hockey dynasty, and one of the rare few who can see the unseeable. He’s a straight man who wears his heart on his sleeve, has grown up searching for a Bond, and dreams of finding the love of his life.

Legend never said anything about what to do when sparks fly between two people opposite in more ways than just magic.

When I learned that there was a story about magic, hockey players, and an M/M relationship, I was so excited. It was as if this book was written for me!

However, I have to admit that I was a bit hesitant to dive in after reading the heavy information dump in the Prologue, which introduced all the different types and categories of magic and the different types of people who wield them. I feared that I would never manage to keep this confusing new magical universe straight in my head, but I needn’t have worried. Though magic was an undercurrent of the plot, the main story revolved around the relationship between our two main characters. It didn’t take long for the story to completely hook me and steal my heart — magical knowledge not required.

What I love about this story is how unique it is. Here we have a world where everyone has access to some sort of magic. Moreover, the author gives us a story centered around the relationship between an openly bisexual pop star (A.B. Cerise) and a (supposedly) straight professional hockey player (Matthew Hellman) who’s about to enter the NHL as a star goalie. Until meeting A.B., Matthew always had assumed he was straight, and it took him a while to realize that perhaps he wasn’t so straight after all, resulting in a delightful slow-burn romance.

In addition, the two men may or may not be their one true perfect magical mate (it’s called a “bondmate” in the story). I loved the speculation around the idea of “bondmates” and how most people in the novel considered it more of a myth than actual fact. It’s important to mention that from the moment they meet, Matthew is convinced that AB is his bondmate, whereas was AB doesn’t believe in them. I enjoyed the fact that not a lot is known about the bondmate idea or whether it even really exists— so it is basically uncharted territory for our characters to explore.

Given that both men were celebrities, the public meticulously observed their every move. So what was especially fun about the story were the fake Twitter threads, the fandom, and the articles of the paparazzi speculating about AB’s romantic life, a lot of which was hysterical and made me laugh out loud on several occasions.

This ended up being a truly heartwarming story with adorable main characters. I loved seeing how the two men managed to tear down the other’s self-imposed walls, allowing them to open their hearts to each other. Their love is engaging and passionate, and they’ve become one of my favorite couples. AB and Matthew both recognize there is too much complication in their lives for a relationship, but at the same time, they are both so intensely drawn to each other and get so much comfort from each other that they can’t stay away. The romance in this book is a tier above and what really made this work for me was the connection our two guys had, realizing that what they each wanted was always right in front of them. This is the type of book that will make even the most cynical of readers believe in love.

All that being said, I thought the world-building and character-building in the story were phenomenal. I loved this world that the author invented, populated with well-fleshed out and lifelike characters. The characters are so realistic and relatable that they jump off the page. Add to that magic, stardom, fandoms, social media drama/speculation, clinical anxiety, and homophobia in the hockey community, and we end up with a genuinely compelling story. Oh, and did I mention the book contains beautiful illustrations? This added an extra special element to the reading experience for me.

All in all, snappy dialog, stellar world-building, a nosey public, hidden magic, and a sweet, slow-burn romance make The Magic Between a standout for me, and it gets all the stars.

A huge thank you to Netgalley for providing a review copy of this book. This book is scheduled to be released on February 15, 2022.