You are here: Home / Middle Grade / Review of The Lightning Thief (Percy Jackson and the Olympians Book 1) by Rick Riordan 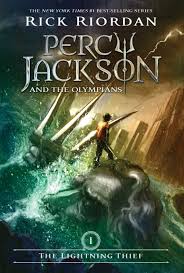 I read the first couple of books in this series years ago when they first came out, but I don’t remember too much about them. So I wanted to reread this series, especially since I want to read a couple of the other series by Rick Riordan and figured I probably should read Percy first.

For those of you who haven’t read it, it follows 12 year old Percy Jackson, who, after one of his teachers transforms into a terrible monster and tries to kill him, learns that he is a half-blood meaning that he’s half human, half god and that his father is one of the Olympian Gods though we don’t learn until later which one. He also learns that his best friend in school, Grover, is a Satyr – half human and half goat.

When Percy’s mom finds out what happened to him at school with the evil teacher creature, she and Percy hop in the card, and she takes him to Camp Half Blood, a summer camp for demigods – the 1/2 children of gods. Oh, and along the way, there’s a fierce battle with a minotaur.

While he’s at camp, there’s an unthinkable crime: Someone has stolen Zeus’ lightning bolt, and unless the true thief is found, the Gods will engage in a catastrophic war amongst themselves, resulting in the potential destruction of earth.

So now, along with the help of a satyr and a daughter of Athena, Percy must journey across the United States to find the thief. Along the way, he faces a host of mythological monsters and old gods determined to stop him.

So I ended up loving this book, as I did the first time I read it. The Lightning Thief is everything that I love in a story: great characters, great villains, and plenty of non-stop action. I can’t wait to get to the next one in the series.

Purchase The Lightning Thief at Amazon

Purchase the Lightning Thief at The Book Depository