You are here: Home / Suspense/Thriller / Review of The Institute by Stephen King 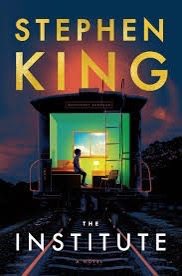 The Institute is Stephen King’s latest book, and I’d have to say one of the most psychologically terrifying that I’ve read in a while. The story follows a 12-year-old boy named Luke Ellis, who is a child prodigy and is going to be attending two different prestigious universities simultaneously in the upcoming semester. He’s also demonstrated some telekinetic ability, such as the ability to toss empty pizza pans to the floor and close cabinet doors with his mind.

But Luke’s ideal life is shattered one night when intruders enter his home while everyone was asleep, murder Luke’s parents, gas Luke and load him in the back of a van.

He awakens to find himself in a bedroom that resembles his own, yet it’s missing the window. He soon discovers that he’s in a sinister place called “The Institute” run by the evil Mrs. Sigsby and her harsh and ruthless crew of caretakers, cafeterias workers, doctors, and techs. In the Institute, there are other kids who have also been kidnapped from their homes — kids ranging in age from 7 to about 16. All of these kids are special in that they all have either telekinetic or telepathic talents, and they’re known as either TPs or TKs.

This is probably one of the most unsettling stories that I’ve read in a long time. What we have here is an evil institution hidden away in the middle of the Maine woods that performs horrible and bizarre experiments on kidnapped children, including mysterious injections that cause convulsions.

But what I found especially distressing about this story is the behavior of the ruthless caretakers. We’ve all grown up believing that adults will be nice to us if we’re nice to them. That is so not the case here. If a child behaves and does what they are told, they get tokens, which they can use in the vending machines for treats (including cigarettes and booze). But if they don’t go along with what’s asked of them or dare to smart off, the scumbag caretakers don’t hesitate to slap the children across the face, punch them in the stomach or zap them with their tasers.

The harshness and the violence the kids endured were shocking, and I felt sick to my stomach here and there while reading it. That’s the part I found especially distressing: the utter lack of scruples. There was also the absence of any sense of fairness, which is another thing young children tend to believe it.

We then take a harrowing journey along with the children as some of the Institute’s biggest secrets come to light.

Now what’s interesting about this book is that in the opening pages, we’re introduced to an ex-police officer named Tim Jaimeson, who left his job and hitchhiked to the small town of Dupray, South Carolina where he took on a job as a “Night Knocker.” There he meets all sorts of interesting people, especially the endearing and utterly eccentric Orphan Annie, who seemed to be a bit of a conspiracy theorist.

I found his story quite compelling, and I had a difficult time figuring out how his adventure fits into that of the Institute, which was supposedly the theme of the novel. But then, the story completely switches gears and for the rest of the book, were immersed into the day-to-day lives of the children. But we do meet Mr. Jameson again as he becomes an integral part of the storyline later on in the book when the novel comes full circle.

This is quite a long book….I actually listened to this on audio, and it was over 19 hours. But what a page-turner! At no point was I bored but instead was enthralled and often horrified by the brutal plot-line of the story.

The plot drew-me right in from the get-go, and I became obsessed with this story. I mean, what goes on in that Institute is sheer insanity, something that I couldn’t even begin to imagine on my own. And I thought that the character development was phenomenal. Stephen King truly knows how to write children. We really get to know the kids: Luke, Avery, Kalisha, Nick, George, and the others — and yes, we even get into the head of the evil characters, a place that wasn’t very comfortable to be in.

The friendships that grew between the kids were especially heartwarming, and I loved how strong and distinct each kid’s voice was. I was especially enamored with Luke, who turned to be not only intelligent but also brave and devoted with an extra big heart — and even though his situation looked absolutely hopeless, he soldiered on with an admirable resolve.

Now I will say that this probably isn’t the book for more sensitive readers as the book deals with topics such as child abuse (both physical and emotional), suicide, murder, grief, PTSD, drowning, loss of loved ones and more. That being said, the book was definitely difficult to read in places. Your heart will break into a million pieces, and you’ll experience feelings of horror and revulsion.

But for me, the story was worth sticking with it, and I ended up loving this masterfully told tale. I loved that, despite the horrors that the kids were put through, they all supported each other and rallied together when necessary.

This definitely has made my list of favorite Stephen King novels. It was captivating, thrilling, and unsettling, and I felt that the heartbreaking scenes were nicely balanced by the blood-pumping action scenes and complex moral dilemmas.

I loved the original premise of this intense, sometimes brutal, no-holds-barred thriller and felt that the ending did not disappoint. It ended up being a heart-pounding story of courage and sacrifice.

The story was brilliantly paced, well-constructed, and flawlessly executed and left me on the edge of my seat for most of it. It was indeed a spine-chilling, tension-packed gripper.

Purchase The Institute on Amazon

Purchase The Institute on The Book Depository