You are here: Home / Horror / Review of The Heart-Shaped Box by Joe Hill 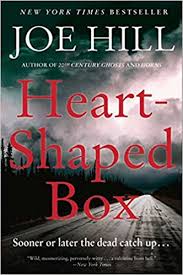