You are here: Home / Fantasy/Urban Fantasy / Review of The Girl in the Tower by Katherine Arden 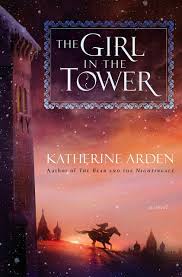 This is the second book in the Winternight Trilogy and takes place in the mid-fourteenth century.

The Girl in the Tower picks up shortly after the events of the first book, The Bear in the Nightingale. Vasya is on the run after being accused of being a witch and cast out by her village. Deciding against life in a convent or a life with a husband, Vasya takes off on her trusty stallion Solovey to see the world, a thirst for adventure in her blood.

Given that during this time period it is unheard of for a maiden to go off exploring on her own, Vasya disguises herself as a boy for protection. But she soon learns that the world is not without its cruelties as she stumbles upon village after village which has been burned down by Tartar bandits, many of the occupants murdered and their young daughters stolen away.

She eventually ends up in Moscow on the doorstep of her sister Olga and her brother Sasha, the monk. She plans to stay for a short visit in fear that her masquerade may endanger her siblings, but she inadvertently ends up catching the attention of her cousin Dmitrii, the Grand Prince of Moscow. Dmitrii is captivated by the brave and fearless young man named Vasilii he believes Vasya to be, which puts her, Olga’s and Sasha’s lives in danger as well as thrusts her in the midst of political intrigue and treachery. Then there’s the new mysterious lord, Kasyan Lutovich, who seems to have taken a particular interest in Vasya and she must now determine whether he’s friend or foe.

Soon she’s caught up in an intricate web of lies and deception, while carefully guarding the secret of her true gender and attempting to remain in Dmitrii’s good graces. This proves more difficult than she could have imagined once she learns that there’s a new evil force threatening her cousin’s kingdom and she is the only one who can stop it.

Like the first book, I adored Vasya’s character. I loved how she left her village with nothing and ended up falling in the good graces of the ruler of Moscow and becoming known to the people as a brave and fearless hero. Her strength, cunning, and bravery are truly admirable, and it was a treat watching her grow and develop into the strong, powerful, spirited and feisty woman she has become by the end of this second book.

I clearly got the feeling that Vasya was no longer a child and in this book, we’re introduced to Vasya the adult. This was especially evident in her reunion with Olga and Sasha. It was nice to see them together as adults, and it pleased me that after being alone and on her own for so long, Vasya was once again surrounded by the love and support of her family (even though they often didn’t see eye-to-eye).

What really resonated with me was the feminist statement the book made about the role of women in society. In this world, women had two choices: marriage or, if she couldn’t find anyone to marry her, a convent. This was a world in which women have no say, women did not ride horses, women did not go out on adventures, women did not dream of bettering themselves, women did not complain, and women often did not even leave the building. The role of the women was to bear her husband an heir and to manage the household. And here we have Vasya: a fiercely independent woman who ignores all of these societal conventions and decides to live life on her own terms, no matter what the ultimate cost to her. In this way, she is indeed a courageous and admirable character.

I also loved watching the evolution of Vasya’s relationship with Morozko and her sassy magical Bay Stallion Solovey. To my delight, Morozko the Frost Demon (AKA The Winter King or The Russian Death God) plays a much bigger part in this novel than in the first, and the scenes between him and Vasya were some of the most emotionally-intense and heart-wrenching in the book. We also learn quite a bit more about Morozko: his origins and his complicated role in Vasya’s life.

I once again enjoyed the supernatural aspect of the story and seeing Vasya’s interaction with the various spirits in the book, some of which help when things become dire. In addition to Morozko’s larger-than-life presence in certain scenes of the novel, we also have a tortured ghost, a sorcerer, a Firebird and several domovoi (local spirits/beings).

The world building in this book was phenomenal. I could almost taste the food the characters enjoyed at the feast and feel the frosty chill of the cruel Russian winter air upon my bare skin. The gorgeous descriptions and details in the book are vivid and lush, resulting in a truly atmospheric novel that’s moody, immersive and alive.

I am hard-pressed to come up with anything I disliked about this story. My only real niggle was that I would have liked to have learned more Koshchei the Deathless, who is the villain of our story. My knowledge in Russian folklore lacks in this department so a little more backstory on this character would have been helpful in understanding his role in the story. I would have liked to know more about his motivations and his reasons for doing what he did, which I felt were absent.

There were also a couple of scenes when Vasya acted way more immature than her years, and her treatment of others often had a bit to be desired, especially in regards to Morozko. I felt that her excessive harshness towards the frost demon was mostly unwarranted and undeserved, especially considering everything he did for her and how many times he saved her life.

But moreover, the author gives us a brave, kick-ass and undoubtedly flawed heroine to save the day — a character you can’t help but fall in love with. We see how the fate of an entire country rests in the hands of a young girl who, without even realizing it, steps into the boots of a warrior.

All in all, The Girl in the Tower is an enthralling tale of folklore and magic with characters that are vivid and wonderfully rendered, and I absolutely loved it. I can’t wait to read the final book in this bewitching series.

Purchase The Girl in the Tower on Amazon

Purchase The Girl in the Tower on The Book Depository