You are here: Home / Book Reviews - All / Review of The Ghost of Buxton Manor by Jonathan Ferrara 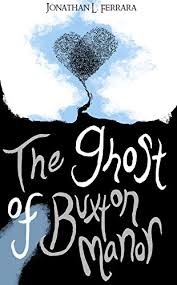 The Ghost of Buxton Manor follows the ghost of 17-year-old Rupert Buxton who, for close to a century, has been tethered to his childhood home and living more or less a perpetual fog. He pretty much lingers in limbo, passing his time reading and desperately — and unsuccessfully — trying to remember his former life. You see, he has no idea how he died or why he’s stuck at Buxton Manor. Hell, he doesn’t even remember his family. At the beginning of the novel, you really got a feeling for the specter’s crippling loneliness.

But Rupert’s life — or should I say afterlife — is drastically about to change.

First, there is the unexpected visit by Dr. Wyman, a ghostly therapist who offers his services to Rupert, promising to help Rupert to remember his past. But Wyman isn’t Rupert’s only visitor. There is also the strange ghostly trio of Bloody Mary, the Weeping Bride, and the Headless Horseboy who show up on Rupert’s doorstep also claiming to want to help Rupert.

The most significant change and challenge facing Rupert, however, is that Buxton Manor has been sold, marking the arrival of a new family moving into Rupert’s home: Caroline, George and their son, Aaron who I believe is around the same age as Rupert. Now Rupert feels an immediate and unexplainable connection to Aaron, and it seems that on some level, Aaron can sense Rupert as well.

Despite Dr. Wyman’s warnings to stay away, he’s unable to resist. Of course, Rupert eventually is able to reveal himself to Aaron, and the door to both of their worlds is blown wide open. Lots of angst, intrigue, and drama follow as Rupert begins to put together the pieces of his past and once they both discover Aaron’s essential role in that process. There’s a lot of talk of Rupert’s unfinished business, and it becomes clear pretty quickly that Aaron may be the key to that unfinished business

What I found especially interesting about this story is that the characters are loosely based on actual historical figures, Rupert Buxton and Michael Davies (who is also a character in the book), and they were lovers, and both drowned together in 1921. Michael Davies, along with his brothers, he was the inspiration for J. M. Barrie’s characters Peter Pan, the Darling brothers, and the Lost Boys and the story of Peter Pan, in fact, plays a huge role in this book.

This was a beautiful book that I absolutely loved, and I say this in all seriousness — I hated for it to end, I got so invested in these characters and cared about what happened to them. This book had ghosts, a necromancer, mystery, intrigue, lots of twists and turns, big surprises, murder and most of all, love.

You know, I read quite a few LGBT romances, but this was the best one that I’ve read in a long time. Though I found this a tender love story, it was a lot more, and it dealt with some very loaded issues such as grief, betrayal, regret and loss and the paralyzing emotional suffering that follows.

But without giving anything away, it’s also a story of hope and second chances. So though this novel does have a romantic lean to it, that is not the main point of the story. There was so much more to it than that. It was a fantastic story with endearing, carefully crafted characters and I loved Rupert and Aaron. They are both lovable, wholesome characters with strong, unique personalities and wonderful, tender chemistry between them.

It’s funny – I read this a couple of weeks ago, and it is still on my mind. I was totally mesmerized by The Ghost of Buxton Manor and continued to ruminate over the characters and story long after completing the story. Truly unforgettable. This book is just so, so, so….magical and it’s just the kind of story I adore — funny, heartfelt, ghostly and seriously freaking romantic. Plus there’s that whole soulmate thing going on.

Unfortunately, I don’t believe the author has written any other books. I do hope he does because he has a lovely talent from bringing a story and a story’s characters to life. Yeah, I gave this one 5 stars.

You can check out the book here on Amazon or at The Book Depository.