You are here: Home / Contemporary Fiction/Classics / Review of The Far Field by Madhuri Vijay 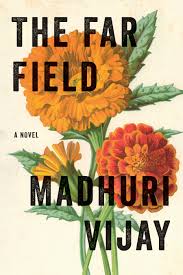 This was a Book of the Month club selection for this month, and the synopsis sounded fascinating so I thought I’d pick it up. I was not disappointed.

The Far Field follows a young, fairly well-off Indian woman from Bangalore named Shalini, whose mother had recently passed away and Shalini is having a difficult time with her mother’s death. She recalls a Kashmiri clothes salesman named Bashir Ahmed who would visit her childhood home and with whom her misanthropic mother struck up a friendship, which in and of itself was unusual, given that her mother was hot-tempered, sarcastic, critical, brutal and mocking of pretty much everyone around her. She definitely was not a pleasant person to be around though Shalini was quite loyal to her. But regardless, Bashir would come to their house every couple of months and spend the afternoon with Shalini and her mother, and it was during those times that her mother appeared happy and joyful, something Shalini usually didn’t see in her mother. Bashir’s visits came to a sudden halt two decades earlier, however, and it was shortly after that when her mother’s mental health went downhill.

Shalini decides to head out to Kashmir find her mother’s long-lost friend, convinced that finding the man and telling him about her mother’s death will somehow bring her closure with her mother’s passing. It is a risky journey on her part given that Kashmir is wracked by war and unrest and that’s precisely what Shalini discovers in the remote Himalayan village where she finds herself. There, she’s immediately integrated into the lives of a generous family who not only offer her shelter and friendship but also protection. But the more her relationship with the local villagers and the family deepens, the more she unknowingly threatens their safety, especially when uncertainty and old hatreds resurface.

First off, I loved how real this story felt to me. I often forgot that I was reading fiction as it felt that I was hearing a memoir from the mouth of someone who had just gone through a challenging time in her life. The attention to detail and the rich descriptions of place in the story made me feel as though I were in the village right along with our protagonist.

I also enjoyed the manner in which the story slowly unfolded, in which the author switches, using alternating timelines, from Shalini’s childhood where we learn about her and her parents, to the present day where we are transported to her time in Kashmir. So we’re allowed to see how Shalini’s past shaped her into the person she is today, for both good and ill. I thought she was a fascinating character and I enjoyed getting to know her as her story evolved. I also loved seeing the evolution of her complicated and often heart-wrenching relationship with her mother and how that relationship — and Shalini herself — changed after Bashir’s final visit.

I loved the many themes that run throughout the story: loss of one’s parent, loss of one’s spouse, grief, family, privilege, suicide, depression, reconnecting with those we have lost, trust, empathy, and politics. Though it is a relatively slow-moving character-driven story, there is so much going on throughout Shalini’s narrative, including numerous twists and turns, which managed to hold my attention throughout the book.

Along with the evocative sense of place, I also adored the secondary characters, all of whom really came to life in this story. They were so vivid, so real even raw at times. Though the rich storytelling, we were able to see and understand the motivations of these characters, with each and every one of them adding essential elements to the story.

I loved the manner in which the culture, the political strife and the unrest of the region were explained to us through the opinions of the locals, also providing us a first-hand account of their challenging everyday lives. I liked how dark and frequently grim situations in the story are lightened by realistic dialogue and genuineness of feeling on the part of the characters. Character development is undoubtedly among the Far Field’s list of shining accomplishments.

For the most part, I found very little to dislike with this book. There are certain aspects of Shalini’s character, however, that I didn’t particularly care for such as her rudeness and self-centeredness, her sense of entitlement as well as her immaturity. I also felt that her excessive naïveté was a bit over the top for a woman of her age and I had a difficult time buying into it. Though she did mature in several ways by the end of the book, I felt that she didn’t quite reach the level of maturity and empathy for the plight of others that she should have by the story’s end.

It’s also worth mentioning that this is a character-driven story, so there isn’t a lot of action going on in the beginning of the book. As such, the story does take a while to get going.

The Far Field is an extremely rich and moving coming of age story that deals with many loaded issues, including class prejudice, guilt, coming to terms with one’s identity, forgiving ourself, regret, taking a good hard look at our beliefs and choices and learning how to live with and accept the terrible decisions we make in life. The author also manages to humanize and provide compassionate insight into the conflict between India and Pakistan that’s plagued the area for so long and in so doing, manages to hit the reader right in the heart.

Though unsettling at times, I felt that this book was also an extraordinary story of a young woman’s passage to self-discovery as she tries to make sense of the chaos around her. This was a subtle blow-me-away kind of book on so many levels, and I’m still mulling it over many days later. I ended up loving this hauntingly beautiful novel and look forward to reading more by this author.

Purchase The Far Field from Amazon

Purchase The Far Field from The Book Depository