You are here: Home / YA Contemporary / Review of The Evolution of Jeremy Warsh by Jess Moore 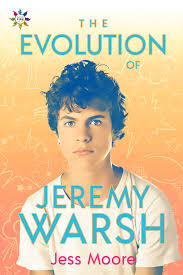 The Evolution of Jeremy Warsh takes place in the late 1990s and follows Jeremy Warsh, a high school senior and artist who, ever since his grandpa passed away, has put aside his comic art and not touched it. Because he and his mom are struggling financially, Jeremy doesn’t count on going to college but instead, expects a boring life of drudgery.

Then things begin to slowly change for Jeremy. His best friend Kasey comes out of the closet, he receives an unexpected gift from his father and his other friend Stuart begins dating. Inspired by his friends, Jeremy picks up his pencil and starts drawing again, creating a sassy, wise-cracking, no-nonsense, in-your-face character he named Penny Kind. What’s special about Penny, however, is that she speaks to him — literally — and is not afraid to expect and demand more from him than he’s currently giving. That is to say, she holds him accountable for all of his actions and inactions, causing him to continually reevaluate his life and his decisions.

This is especially true after he kisses a boy at a party and he begins to question everything he thought he knew about himself as new and confusing feelings surface. I really enjoyed how Jeremy’s art not only helps him cope with his problems and insecurities but also shows him ways to overcome them, opening his eyes to the different paths available to him.

It was so much fun journeying along with Jeremy as he experienced the ups and downs of life in high school: dealing with high school bullies, facing an uncertain future, finding his place in the world, feeling like an outsider, supporting his friends, supporting his family and discovering and accepting his emerging sexuality. I found him to be not only a lovable and empathetic character but also a wonderfully relatable and memorable one who revealed more and more of himself as his understanding of the bigger world around him unfolded.

Additionally, the diverse cast of secondary characters in the book is truly delightful. These are characters who not only amuse and entertain us but also touch us, and prompt us to think about who we are and how we want to live our lives. Jess Moore really seems to understand the teenage soul — the doubt, the uncertainty, the longing, the self-awareness, the challenges and the confusion and in so doing ended up creating a believable world with plenty of heart.

I also thought the burgeoning romance in the story between Jeremy and Matt was soft, gentle and well drawn. I liked the fact that it was slow and not at all rushed, resulting in a sweet and heartwarming affection that didn’t take away from the rest of the story. It was fun, however, to see Jeremey move from a place of doubt and confusion to a place of acceptance and certainty.

This feel-good story has everything you need for the perfect high school senior story: a tight group of witty and charming friends, a zombie homecoming dance, a high school senior identity crisis, an ultra-cool mom, a will they/won’t they romance, and that somewhat melancholy high that comes with endings and new beginnings. All in all, a delightful story!

Purchase The Evolution of Jeremy Walsh at Amazon

Purchase The Evolution of Jeremy Walsh at The Book Depository