You are here: Home / YA Contemporary / Review of The Cost of Knowing by Brittney Morris 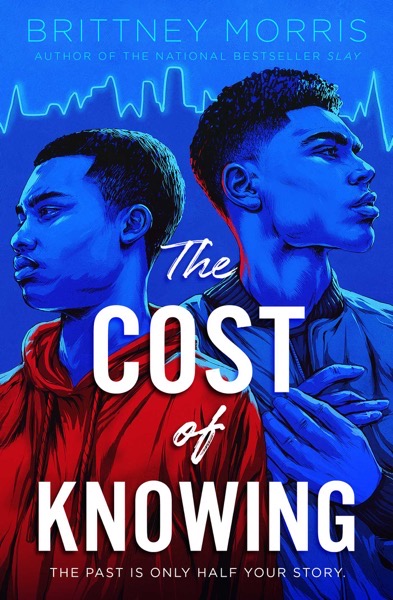 The Cost of Knowing is a young adult novel that follows sixteen-year-old Alex Rufus, a black teen, and his twelve-year-old little brother Isaiah whose parents were killed in a car accident a few years prior. Alex isn’t quite like other kids because ever since the accident, he has the gift of psychometry – that is to say, he can see the future whenever he touches an object or a person. For instance, if he touches an ice cream scoop at work, he sees himself using it to scoop ice cream a few minutes later. If he touches his car, he sees it wrecked and underwater a few years from now.

He also saw his childhood best friend’s death a few years prior, so since then, he lives in pretty much a constant state of anxiety surrounding his gift. This burdensome ability also makes it challenging for Alex to maintain relationships because since he foresaw his friend’s death, he’s generally avoided touching the people he cares about, which isn’t always easy to accomplish and has led to additional complications for Alex. For instance, it’s caused conflict between him and his girlfriend, who isn’t aware of Alex’s “gift” and doesn’t understand why Alex won’t hold her hand.

But one day, his world turns completely upside down when, after picking up an old family photo, he sees the funeral of his little brother, Isaiah. Alex knows that the events of his visions cannot be prevented — what he sees has always come to pass. So now, Alex is determined to be the best brother possible during Isaiah’s remaining days and to do everything in his power to ensure that his days are safe and happy.

Though this is the story of two brothers, at its core, the book is also about what it means to be a young Black man today. In fact, the author dedicates the book: “To all the Black boys who had to grow up too early.”

As Alex attempts to protect his brother, we witness how the boys have to deal with the realities of racism, stereotypes, and constant microaggressions, especially given that they live in a primarily white neighborhood. We see their continuous fear and anxiety of being targeted as criminals because of the color of their skin. The author illustrates nicely how people can be racist without believing they’re racist and addresses several themes such as the effects of trauma, systemic racism, intergenerational trauma, intimacy, grief, fear, guilt, toxic masculinity, mental health, Black history, ignorance, privilege, power, and more. Additionally, there was the compelling theme of Black ancestral pride in which the legacy of Alex’s ability is explained through the lens of familial history and heritage. I also enjoyed the underlying theme of the necessity of working through our traumatic experiences.

I loved the beautiful relationship that developed between the two boys. Up to this point, they were mostly estranged because Isaiah spent all of this time hiding in his room (as it turns out, Isaiah has his own secrets). It warmed my heart to see the boys open up to each other and experience joy together. They even discover that they have the same musical tastes, a scene which brought a smile to my face.

Though at times heartbreaking, The Cost of Knowing is also uplifting. It’s a gripping and magical book that’s relevant, moving, and poignant. Though the narrative does examine several serious themes, the powerful and addictive plotline, as well as the relatable characters, made this a page-turner for me. I loved this brilliant book and give it 5 Stars.

Purchase The Cost of Knowing on Amazon