You are here: Home / YA Fantasy/Urban Fantasy / Review of The City of Lost Souls by Cassandra Clare 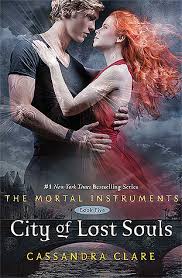 The City of Lost Souls is the fifth book in the Mortal Instruments series. I told myself that I wanted to finish this series this year so I have only one more to go after this one. Again, it’s difficult to say too much about this book without spoiling the series for those of you who might not have read it.

I did like this one — I’ve enjoyed all of them, truth be told, though I do find the romancey scenes a bit much at times….there’s a lot of “Oh Jace…”, “Oh Clary” which gets a tad repetitious at times.

But that aside, there still is plenty of action and surprises to make this well worth the read.

In this book, Jace is in some pretty serious trouble, both from the Clave and from the one who’s holding him hostage against his will and who has a terrible plan which could result in the destruction of the earth.

So now it’s Clary and her Scooby gang to rescue Jace before the Clave does — and before the evil plan can be set into motion. They decide that there’s only one possible way to save Jace but doing so may very well take one of their lives.

Let’s see, what do we have in this story: There’s plenty of demons, interactions with Seelies, the appearance of an angel, a visit to the Iron Sisters, werewolves, revenge, lots of blood and definitely some major betrayal.

I have to hand it to the author; she does a great job of writing shiver-worthy villains. I’m really pleased with how multi-dimensional and well rounded the main bad guy is. It’s genuinely refreshing as so often, the villains are these one dimensional, cardboard-cutouts which is a pet peeve of mine.

Overall, I really enjoyed this book and look forward to epic battle which no doubt will occur in the last book in this series, The City of Heavenly Fire.

Purchase the City of Lost Souls at Amazon

Purchase the City of Lost Souls at The Book Depository