You are here: Home / Contemporary Fiction/Classics / Review of The Christmas Train by David Baldacci 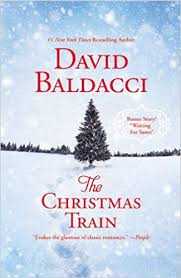 I’ve read a couple of David Baldacci thriller novels in the past, and The Christmas Train was completely different any from those. I listened to this in audiobook format and was delighted to discover that they added music and various sound effects during certain parts of the recording which really added to the experience. This book was also quite nostalgic for me as it brought back all the fun memories of the train trips I took while studying in France.

This story follows Tom Langdon, a disillusioned journalist and a former war correspondent Tom Langdon who finds himself on a train trip from Washington to Los Angeles during Christmas where he plans on spending the holidays with his girlfriend, a Hollywood voice-work celebrity.

We learn that Tom has been banned from flying for a year after an altercation with a TSA agent so deciding to make lemonade from his lemons, chooses to write a story about train travel.

So, Tom embarks on his journey across country and along the way, he meets all sorts of eclectic and colorful characters: there’s a young couple planning on eloping, a famous movie director who’s planning on creating a movie about trains, a retired priest, a former train engineer who lost his job due to budget cuts, a tarot card reader, several boisterous train personnel, a boys choir and even a reunion with someone from his past.

And there’s a mystery to solve as items begin disappearing from the passenger’s cabins, meaning there is a thief on board among them. But worst of all, the blizzard of the century is bearing down on them, and the passengers and crew are forced to come together if they want to survive the trip — and at one point in the novel, things don’t look too good for any of them.

This was really a fun and warm-hearted Christmas story about a man whose ride turns out to be quite an adventure — one he’ll likely never forget reminding us that it’s often the journey and not the destination that’s important. In fact, there was even a quote to that effect in the book:

“It’s not getting from A to B. It’s not the beginning or the destination that counts. It’s the ride in between”

This delightful tale has a little of everything…it has mystery, danger, thievery, setbacks, suspense, romance, relationship intrigue, unscheduled train stops, a wedding and of course, the miracles of Christmas, and with enough twists and surprises to prevent you from guessing the ending. It also provides an interesting history about trains and train travel that I found especially fascinating.

All in all, The Christmas Train is a sweet, magical story with memorable characters that just may give you the yearning to take a train trip yourself.

Purchase The Christmas Train on Amazon

Purchase The Christmas Train on The Book Depository