You are here: Home / Suspense/Thriller / Review of The Chalk Man by C.J. Tudor 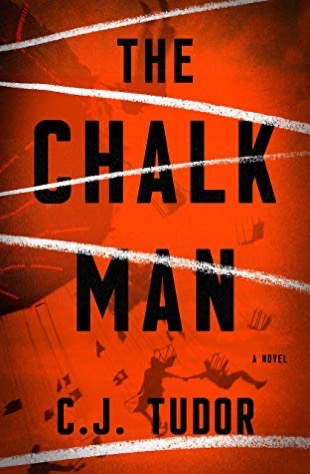 The Chalk Man is a book whose premise intrigued me right from the get-go, especially the Stranger Things vibe that the story had.

So this follows Eddie Adams (aka Eddie Munster) and his group of friends: Hoppo, Fat Gav, Metal Mickey, and Metal Mickey and the narrative jumps back and forth between two different timelines, both told from Eddie’s point of view.

In the 1986 timeline, Eddie is 12-years old, and the kids spend their day riding their bikes around town leaving little chalk stick figure messages for either other — messages only they can understand. But things change for Eddie and his friends when one day, a stick figure leads them to the dismembered body of a young woman. This, however, is only one of the tragedies that tore the community apart that summer for Eddie and his friends. Lots of bad things happen that summer and the small town where Eddie lives is filled with secrets, lies, hypocrisy, and some pretty nasty characters as well.

Thirty-years later in 2016, Eddie is fully grown. What’s interesting about this timeline, is that we get to see how the events that took place 30 years earlier affect Eddie and his friends in the present.

Now as for Eddie, he’s single, a teacher, lives with a rather odd roommate, drinks too much and thinks he’s put his past behind him. But then he receives an anonymous letter in the mail, containing a single chalk stick figure and as it turns out, his friends got the same letter. They assume it’s only a prank until one of them turns up dead. It becomes clear, then, that it’s not a prank and that the past has come back to haunt him. Eddie soon finds himself thrust into a 30-year-old mystery.

I thought the author did an excellent job of juggling the two timelines. This method doesn’t always work well in novels, but Tudor managed to expertly pull it off in a perfectly-paced narrative. She also managed to give us a fantastic set of characters in a convincing small-town setting to both fascinate us and distract us. I enjoyed the curious references surrounding the mysterious “chalk man” thought the story, which added to the plot’s intrigue.

This is definitely one of those stories where you should assume nothing and trust no one, one of my favorite tropes. This results in an addicting and unique story with captivating situations, but also some great twists along the way. The fast-paced storyline kept me utterly engaged until the climactic ending.

Now speaking of the ending, though surprising, I couldn’t quite buy into it. It felt just a bit too much over the top for me, resulting in a badly needed eye-roll. So though I enjoyed the story and the characters, the outrageous ending caused me to knock off a star. But still, I found The Chalk Man to be a thrilling and engaging tale with plenty of surprises. It was dark and sinister, with gobs of creepiness and secrets.