You are here: Home / Fantasy/Urban Fantasy / Review of The Binding by Bridget Collins 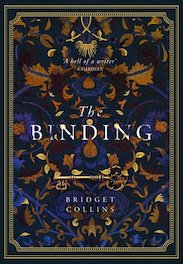 First thing I want to point out is how beautiful the book is, not just the art on the dust jacket but the book itself with gorgeous gold embossing. It’s gorgeous!

The Binding follows a young man named Emmett Farmer who is recovering from a strange illness, of which nobody knows the cause. Though he’s trying to be helpful in his father’s fields, his strength, stamina, and usefulness are only a shadow of what they once were, as he continues to suffer bouts of dizziness, nausea, and general weakness.

Summoned by a Witch

One day a strange letter arrives from a well-known Bookbinder named Seredith, requesting that Emmett become her apprentice. Now in this world, a bookbinder is not merely someone who stitches together pages of a book. Rather, Bookbinders are feared, hated and treated with suspicion. Some people call them witches because what they do, is remove portions of a person’s memory and then bind those memories in elegant leather-bound books.

The Art of Bookbinding

People go to Bookbinders to remove those memories that cause them pain, cause them grief or as a manner to hide a dark secret. Do you want to forget something? Go to a Bookbinder. Do you have secrets, an embarrassing mistake or a dark past that you want to be removed from your memory? A Bookbinder can fix you right up. Is the pain or grief from the loss of a loved one so great that you simply cannot live with it? A Bookbinder can remove it all for you. And once you’ve been bound, you’ll completely forget that you’ve been bound.

The books created from these memories have the power to change lives and destroy lives, should they ever fall into the wrong hands. And what happens if those books are ever destroyed? Why, all of the memories in the book come immediately rushing right back to their originator, which could have some quite disturbing consequences.

As Emmett learns from Seredith, Bookbinders aren’t made, they’re born — bookbinding is part of who you are — it’s in your blood. For as long as Emmett can remember, he’s been strangely drawn to books even though his father has strictly forbidden them. His new mentor tells him that Bookbinding is a sacred vocation and informs him that the reason he has felt this affinity for books is that he is “binder-born,” which was also the cause of his illness. But now that Emmett is working with books and fulfilling his destiny, his illness abates, and he finds a kind of peace in his workshop.

Now, this is one of those novels that you can’t say too much about without giving anything away. I went into this book completely blind, having not even an inkling of the plot and I’m so glad I did because the surprises are worth it. Let me just say that not all binders are of the high moral caliber as Seredith, and there are definitely some bad apples. Some of them are in it just for the money, and some even stoop so low as to illicitly sell these books of memories on the market to make a profit.

Eventually, Emmett unwillingly becomes involved with some of these less scrupulous binders and ends up having to make some really tough decisions. It’s also worth mentioning that the art of Bookbinding is abused by some of the more dodgy characters in the book, leading to some powerful and heart-wrenching scenes. For instance, I found it genuinely chilling that memories from a rape victim can be wiped clean, allowing the perpetrator to walk away unpunished. Emmett soon finds himself plunged into a world of wealth, abuse, cruelty, depravity and deception.

A Story in Three Parts

The book is told in three parts. The first part follows Emmett’s story in the present as he is summoned by the Bookbinder and begins his apprenticeship. It’s in this part where we learn the truth about what Bookbinding actually is. I found this section absolutely riveting as we’re introduced to the somewhat unsettling and macabre world of Bookbinding.

Part Two of the story brings us to the past but prior to Emmett’s illness, before Emmett knew who or what he was. Here, we’re integrated into Emmett’s daily life on the farm and see the events that led to Emmett’s illness and his subsequent summons by the elderly Bookbinder. Initially, I found this abrupt change in direction from the first part a bit jarring, mainly because I didn’t understand the purpose to this section and how it related to the story we’ve been told thus far. But then, all the pieces fell into place leading to a delightful “ah-ha!” moment.

In Part Three, we return to present day, but interestingly, we are no longer experiencing the story through Emmett’s eyes but instead, through the eyes of someone else and I found this section just as beautiful and compelling and as the previous ones.

The Binding is a beautiful, atmospheric and haunting story that I found to be a remarkable read. I adored the intriguing and frightening premise of this fantasy world where portions of a person’s memories can be removed and then be preserved for safekeeping in a book. I thought this concept was absolutely mind-blowing — it was so imaginative, original and clever. This was one of those books that stuck its hooks into me almost immediately, and I didn’t want to let go at the story’s finish. A truly captivating story that I didn’t want to end.

Though the world of the Binders is fascinating, the heart of this story lies in the beautifully woven yet forbidden romance of two desperate souls who find themselves caught up in the dark and cruel machinations of others around them. This story wrecked me in the best and most unexpected ways. It hit me right in the heart, and I’m still thinking about it many days later so in this way, it’s an incredibly profound and shattering story.

This book certainly raises some interesting questions and made me wonder how many of us would pay a visit to a Binder to get painful or embarrassing memories permanently removed, thus creating new stories for ourselves in the process? Quite an interesting concept, for sure.

All in all, The Binding is a unique, haunting and beautifully written multi-layered novel that’s unlike anything I’ve ever read before and I completely fell in love with this story. The author created such a vivid and realistic world here that at times, I forget I was reading fantasy. All in all, a solid 5-star read for me and I’m already thinking about giving this one a re-read.

PURCHASE THE BINDING ON AMAZON

PURCHASE THE BINDING AT THE BOOK DEPOSITORY