You are here: Home / YA Fantasy/Urban Fantasy / Review of The Afterlife of Holly Chase by Cynthia Hand 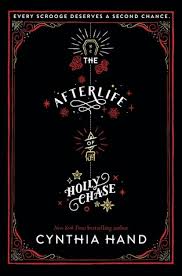 The Afterlife of Holly Chase is a contemporary retelling of a Christmas Carol, but the author creates something entirely original and new in the process.

The story follows our main character Holly Chase, a wholly unlikeable and unpleasant teenage girl obsessed with status and wealth, who is visited by three spirits who show Holly her past, present, and future if she does not change her ways. But being the bitchy, entitled, blunt spoiled brat that she is, she shrugs the visits off, actually laughing at the ghosts toward the end of it. And then a few days later….she dies.

We then jump to 5 years later to Holly’s afterlife where she has been recruited as The Ghost of Christmas Past for an organization called “Project Scrooge” – a company that chooses a new “Scrooge” every year – that is to say, another self-centered, self-absorbed grouch — in the hopes of having them change their ways. If they don’t change their ways, then these “failed Scrooges” end up in the same situation as Holly: working for Project Scrooge.

But this year’s Scrooge throws Holly for a loop when he turns out to be a super hot teenage guy around her age named Ethan and with whom Holly discovers she has a lot in common. But when she makes a rash decision to go off-script, Holly’s whole life — or should I say afterlife — changes, especially given that she appeared to have put the entire project in jeopardy.

But I can’t really say too much more without giving anything away. Let me just say that this was a thought-provoking heart-warming novel and a delightful Christmas time read with an emotional, surprising and satisfying ending. I’ve read many different renditions of A Christmas Carol, but this clever and inventive retelling just might be my favorite as it brought a smile to my face and a tear or two to my eye. What especially set this version apart from the others I’ve read was how much fun it is! I loved the whole idea of Project Scrooge and found it outrageously creative, especially the spectacular plot twist at the end.

The Afterlife of Holly Chase was a fun, fast-paced read which, even though it does have a Christmas theme, could certainly be read and enjoyed any time of year. I absolutely adored this little gem of a novel and recommend it if you’re looking for a feel-good holiday book with compelling characters and plenty of heart.

Purchase the Afterlife of Holly Chase on Amazon

Purchase the Afterlife of Holly Chase on The Book Depository