You are here: Home / Suspense/Thriller / Review of the 7 Deaths of Evelyn Hardcastle by Stuart Thurton 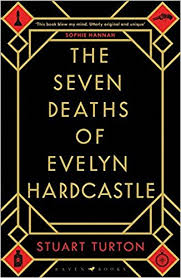 Set around the late 1920’s I believe, the story starts when our narrator wakes up in the morning out in the woods, with no recollection of who he is or how he got there. He witnesses what he believes is the murder of a young woman whose name he knows to Anna. Nearly immobile and eyes clamped shut with fright, the so-called murderer comes up behind him, slips him a compass and tells him to go east. The narrator soon finds himself at the Blackheath manor and learns he has been invited to a masquerade ball hosted by the Lord and Lady Hardcastle.

He later discovers that his name is Aiden Bishop and he’s trapped inside a stranger’s body. A figure in a Plague Doctor’s mask informs him that in order to escape the manor and return to his normal life (of which he still has no memory), he must unveil the murderer of Evelyn Hardcastle, which will be disguised as to not look like a murder and will occur at 11:00 pm that evening. The kicker is that each time he awakens, the day has been reset from the beginning and he is now in the body of someone else, a different guest in the manor and in the process, he takes on the personality, mannerisms, and inclinations of the current host. There is also a race against the clock in that if he fails to uncover the name of the would-be murderer within eight days or eight hosts, he will return to the first day, memory wiped clean, and start the process all over again as he has apparently already done innumerable times before.

Matters become even more dire when Aiden discovers that he isn’t the only one who’s in the same predicament; there are two other people are also caught inside this time loop. Oh, and there’s also a knife-wielding Footman who is out to kill all three of them.

I loved how inventive and original this story was. It’s a mind-bending, multi-layered, intricately plotted murder mystery with a huge cast of characters and a multitude of interwoven elements as we, along with our narrator, try to figure out what is going on. I’ve always enjoyed the “nothing is as it seems” trope which is definitely in play here. As a reader, we constantly question what we know about the hosts and their secrets and soon discover that almost every character is unreliable; every fact untrustworthy. That being said, every little snippet of conversation is important, every encounter and every detail essential to solving the mystery. We learn that Aiden can change little details to the day which will, in turn, change the outcome, as well as help him to glean more information.

I enjoyed how the tension builds right from the first page winding tighter and tighter as the novel progresses and really, doesn’t let go until the utterly surprising ending, where everything is explained. The surprises come fast and furious, keeping you turning the page all the while with your heart in your throat. And just when you think you may have figured it out, the author drops another twisty bombshell.

I also loved how nearly every person whose body our narrator inhibits is despicable, scheming and untrustworthy and how it was a struggle for Aiden to keep their unsavory personality traits and compulsions at bay. In spite of that, Aiden was able to use the physical and mental talents of each of the hosts to gather more clues and bring him closer to figuring out what is going on.

I also liked the Victorian gothic feel to this story. It was atmospheric with haunting imagery such as the depiction of the masquerade ball, eerie the castle-like manor, the murderous footman, mysterious guests wearing Plague Doctor masks, and of course, murder.

Additionally, I loved the redemption aspect of the story which illustrated how even the darkest of individuals can be pulled back into the light and can overcome their darkness to move toward redeeming themselves. It also showed how those who have been severely wronged could move past a thirst for revenge to forgiveness instead.

I enjoyed this book for the most part, but it wasn’t a 5-star read for me. I felt there were too many characters to keep track of, some with too similar names like Donald and Daniel and sometimes, I found myself confused at times. It didn’t help that the story was non-linear with a really complex plot.

Reading this story requires a fair bit of work and intense focus on the part of the reader otherwise one risks missing crucial details and clues. So this isn’t the kind of book with which you can kick up your feet and relax at the beach, but instead, it’s a novel that requires your full attention. There’s a lot to keep track of.

I also felt that the story dragged a bit in places, especially around the 75% mark. But things heated up during the last 20% of the story as we skidded into the exciting climax where all is revealed.

I loved this fresh, intricate and innovative story! It was like Agatha Christie meets Groundhog Day meets Quantum Leap. The 7 Deaths of Evelyn Hardcastle was an amazing, compelling, twisty story and I can’t begin to imagine the effort the author put into plotting this novel. The author does an amazing job of not showing his cards until the very end and expertly juggled the many moving parts of the book resulting in a tightly plotted, engaging, complex story as our main character struggles through emotional, physical, and moral challenges. This was a fast-paced plot-driven story marvelously crafted story with rich, detailed characters and beautiful prose. Recommended!

Purchase the 7 Deaths of Evelyn Hardcastle on Amazon

Purchase the 7 Deaths of Evelyn Hardcastle on The Book Depository